360-DEGREE LIVES: When looks can be deceiving; ever seen a koala jump? 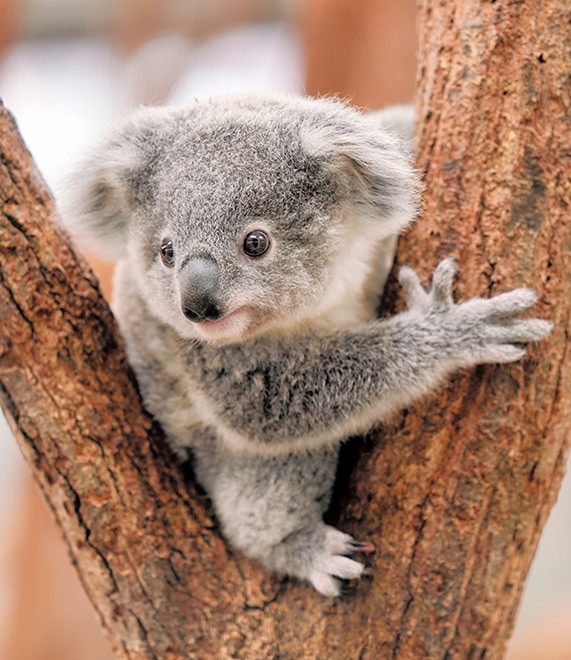 Koalas are known for their stout bodies, beady eyes and snub noses. Their lifestyle perched in eucalyptus trees and eating their leaves creates the impression of a very laid-back marsupial.

But looks can be deceiving.

Japan currently has seven zoos where visitors can view koalas. One of them is the Saitama Children's Zoo in Higashi-Matsuyama, Saitama Prefecture, which has four females and three joeys on display.

Their glass-walled enclosure is filled with trees to create a habitat similar to their natural environment, with plenty of eucalyptus leaves for them to munch on.

In February, a koala named Fuku was orphaned after its mother died. Fuku was born in June last year.

A koala joey will become anxious when it is unable to cling to its mother. That's why four females have taken on the role of sharing parenting skills for Fuku.

According to attendant Emiko Futaba, koalas nurse and carry a joey even if it is not their own.

"They are open-minded and spontaneous," she said.

There are about 700 or more species of eucalyptus in Australia, and koalas feed on dozens of varieties. Eucalyptus trees are grown at the zoo and in Tokyo's Hachijojima island, Shizuoka and Kagoshima prefectures and elsewhere.

After the camera was set up, five koalas seemed content to quietly chew on leaves for a while.

But suddenly, a mother koala jumped from one tree to another with a joey on her back. The others started running and walking on the ground, showing that the animal can move more actively than people expect.

Futaba noted that koalas have five sharp claws on each foot.

The mothers may appear to be carrying their joeys on their backs or holding them in their arms, but the young ones are actually trying desperately not to be shaken off.

The koala is an indigenous species living in areas along the east coast of Australia.

A marsupial in the same family as the kangaroo, the nocturnal animal sleeps up to 20 hours a day. Koalas save energy by sleeping because eucalyptus leaves, their main diet, are low in nutrition and tough to digest.

Numerous koalas and other wild animals perished in the massive bushfires that destroyed vast swathes of southeastern Australia last fall.

Although the Saitama Children's Zoo is closed because of the new coronavirus epidemic, the koalas and other animals are all doing fine, a representative said.