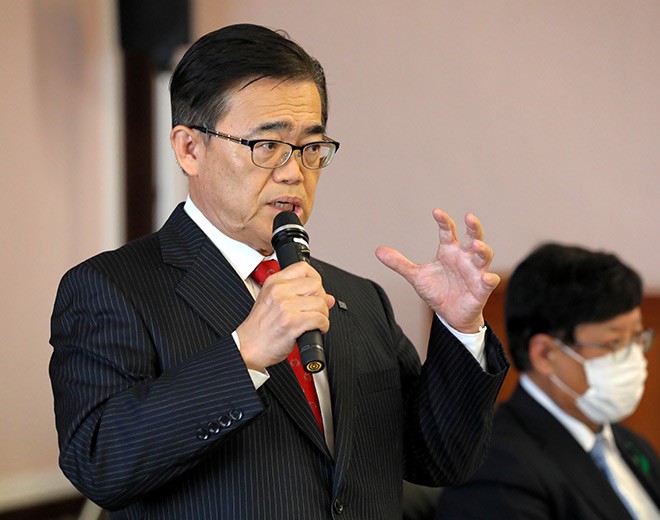 Aichi Governor Hideaki Omura declares his prefecture's own state of emergency for the coronavirus pandemic at the prefectural government’s office on April 10. (Jun Ueda)

Aichi Governor Hideaki Omura on April 10 declared a state of emergency following a prefectural task force meeting to deal with the coronavirus outbreak, urging residents to stay home except for essential purposes.

Aichi is one of a number of prefectures that were excluded from the state of emergency issued by Prime Minister Shinzo Abe on April 7 but are on heightened alert against the deadly disease.

Omura had lobbied the central government to include the prefecture in Abe’s declaration of a state of emergency under the newly revised special measures law.

But the April 7 proclamation only included Tokyo and three neighboring prefectures, as well as Osaka, Hyogo and Fukuoka prefectures.

While Omura will continue to ask the central government to include the most populated prefecture in the Chubu region, he decided it cannot afford to lose any more time in halting the virus.

As of April 9, 301 people were confirmed to be infected with COVID-19 in Aichi Prefecture and 21 had died.

Omura said the prefecture-wide state of emergency follows in the footsteps of the central government’s declaration.

Omura is expected to release an economic stimulus package to respond to the virus outbreak, hoping to minimize the losses to the automobile and manufacturing industries, restaurants and tourism-related businesses as much as possible.

The Aichi prefectural hospital association has reported that front-line coronavirus medical workers who are treating COVID-19 patients day and night are facing prejudice and being hit hard by rumors.

Omura therefore included a measure to prevent such attacks and damage in the proclamation.

Heads of other prefectures have shown impatience with the central government as well.

Kyoto Governor Takatoshi Nishiwaki, along with Kyoto Mayor Daisaku Kadokawa, held a news conference on April 10 urging the central government to add the prefecture to the list of those under a state of emergency.

Nishiwaki cited the 165 people in the prefecture who had been confirmed to be infected with the virus along with one death as of April 9.

Officials were particularly concerned that the number of patients per 10,000 population is the fifth highest in the nation.

“We are in a tough situation, just as bad as Tokyo and the six prefectures,” Nishiwaki said.

Kadokawa also asked people not to visit Kyoto, one of the most popular tourism destinations in the world, until the pandemic dies down.

(This article was written by Masahiro Iwao, Masayuki Takashima and Kyongsk Kwon.)