Hospitals now ‘too stretched’ to treat people who are seriously ill 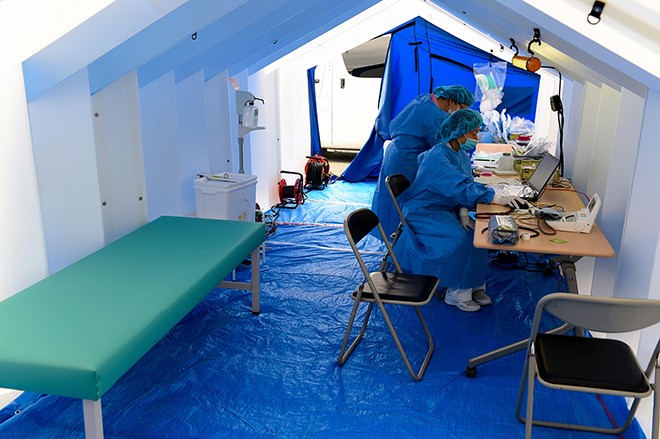 Health care professional work at a tent on a parking lot of the municipal Nishiwaki Hospital to prevent infections at the hospital in Nishiwaki, Hyogo Prefecture, on March 31. (Hajime Hirokawa)

Emergency health care centers across Japan are “too stretched” to treat seriously ill patients, such as those who suffer a stroke, due to a spike in patients with the new coronavirus, health experts warned.

In a statement issued April 9, the Japan Association for Acute Medicine and the Japanese Society for Emergency Medicine also said health workers face a serious shortage of protective gear against the virus.

They plan to submit their findings to the central government as early as the coming week.

Members of the two groups said ambulances transporting patients with a fever or coughing fit are increasingly having difficulty finding a hospital that will treat them as so many facilities are close to being overwhelmed.

As a result, emergency medical care centers are forced to accept the patients.

This is making it difficult for the centers to provide swift treatment for people with grave health problems such as stroke or cardiac infarction, as well as serious injuries, raising fears that lives could be lost.

“We fear doctors may miss the right time to treat them,” the statement said.

The groups also called for a quick, diagnostic testing system that will detect people who are infected with the new coronavirus so they can be quickly isolated.

The statement noted an increase in cases of patients being taken to hospitals to treat injuries or illness, other than COVIDC-19, a respiratory disease caused by the virus, but were later confirmed to be infected with the virus.

They said there was a dire shortage of surgical masks and gowns that medical staff need to protect themselves from the virus.

In an interview with The Asahi Shimbun, Takeshi Shimazu, chairman of board of directors at the Japan Association for Acute Medicine, said, “The overall breakdown of care systems starts with emergency care, which is the entry point of medical treatment for patients.”

Shimazu, who is also a professor of emergency care at Osaka University, cited one case where an elderly patient being transported by ambulance with suspected pneumonia was denied treatment at more than 10 hospitals.

“If the current situation persists, we will not be able to save patients requiring immediate treatment,” he said.

He also cited a survey by his association that found a flurry of reports of patients running a fever being rejected by numerous hospitals before finally being admitted at a facility far from their homes.

The survey also highlighted growing requests for access to mental care from health care workers who are afraid of going home for fear of infecting family members.