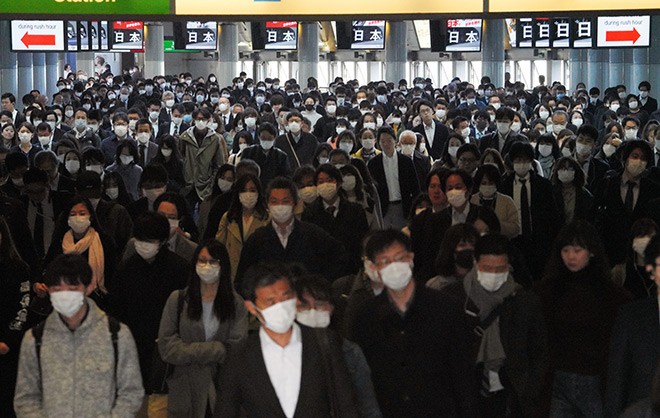 Commuters at Shinagawa Station in Tokyo on the morning of April 8, the day after the government issued a state of emergency to fight the spread of the new coronavirus (Rei Kishitsu)

Prime Minister Shinzo Abe will issue another public appeal to halt novel coronavirus infections, asking for commuter numbers to fall by at least 70 percent in prefectures under a state of emergency.

He also wants the prefectures not covered by the state of emergency to ask their residents to refrain from going to night clubs and similar facilities involving staff waiting on customers.

The central government on April 7 issued the monthlong state of emergency for Tokyo and six prefectures. Residents in these areas have been asked to stay at home and avoid entertainment and other venues with large numbers of people.

To flatten the curve of coronavirus infections, the government has asked the public to reduce possible human contact by 70 to 80 percent.

Abe said at a government task force meeting on April 11 that “the number of commuters had not dropped sufficiently yet.”

He called for more cooperation from the state of emergency-designated areas, saying office workers should be able to work from home, in principle.

For those who must come to their office, Abe said, “The number of such workers needs to be cut by at least 70 percent.”

The prime minister said this guidance should be applied to all businesses, regardless of size, and he instructed government ministries and agencies to ask companies under their jurisdiction to comply.

Abe did not elaborate on the legal basis for making the additional request, what constitutes an “office” and the grounds for his reduction target of “at least 70 percent.”

But Yasutoshi Nishimura, the economic revitalization minister who is in charge of containing the coronavirus outbreak, told reporters on April 11 that the request will be made to businesses capable of carrying out such efforts, as opposed to shops and public health care facilities that cannot reduce their worker numbers in providing proper services.

In its revised basic policy concerning the health crisis, the government said commuting to work would be exempt from its request for people to refrain from going out.

However, the policy also stated that contact between people should be curtailed through such measures as reducing commuter numbers by 40 percent and using work-from-home systems.

The industry ministry has already announced a subsidy program for small and midsize businesses to introduce equipment so that their employees can work from home.

But the ministry will begin accepting applications for the program only from June.

The government task force meeting also decided to request prefectures that are not under the state of emergency to ask residents to curtail their nightlife activities. There have also been concerns that people from the emergency prefectures are fleeing to areas not covered under the declaration.

“The traffic of people should not be directed toward prefectures from those that have been placed under the state of emergency,” Abe said.

The reduction was more than 40 percent in Yokohama and the Umeda district of Osaka as of the evening of April 10.