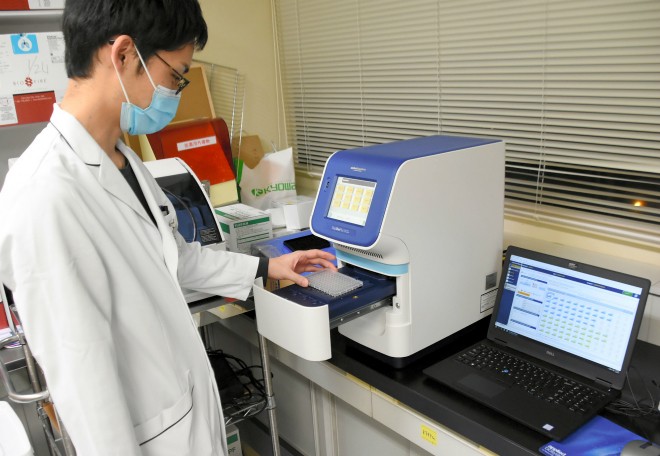 Many Japanese who suspect they are infected with the new coronavirus, particularly those in urban areas, are still experiencing difficulty in getting a medical checkup or a test.

Some of those who show symptoms such as a fever or difficulty breathing complain that they cannot see a doctor. Others say it can take days to be tested and more days to get the result.

There have been cases where the virus has spread within a hospital from a patient who later tested positive.

To alleviate growing discontent and anxiety among the people suffering from the severe effects of the pandemic, it is urgently needed to beef up the nation's capacity to test for the COVID-19 virus.

The urgency of this challenge has been clear for some time now.

In a Feb. 29 news conference, Prime Minister Shinzo Abe pledged to enhance the nation's testing capacity sufficiently to ensure that all patients who their  doctors want tested for the virus can receive polymerase chain reaction (PCR) tests.

But the number of tests performed daily across the country has not been much higher than 7,000.

In early April, the Japan Medical Association warned about the current situation, where, it says, not all potential patients who doctors want tested can get one quickly.

There is growing doubt among the public about how much faith should be placed in Abe's vow and whether they can really rely on the government for this matter.

If the credibility of political leaders is in doubt, their calls on people to stay at home as much as possible will be met with a non-committal response from a wary public and consequently turn out to be ineffective.

Alarmed by the grim reality, the government has announced a plan to increase the number of daily tests that can be conducted from 12,000 to 20,000. It also will include financial support to introduce testing equipment in its package of emergency measures to mitigate the economic damage from the outbreak.

It is, of course, vital to make more testing equipment and materials available. But the government also needs to identify and eliminate, one by one, all the factors causing delays in making diagnostic tests for the new coronavirus widely available in Japan.

In addition to acute shortages of hazmat suits and masks as well as the long time required to send collected specimens to labs, there are not sufficient numbers of medical experts and laboratory technicians who can safely swab noses and throats to collect specimens.

The government is seeking help from private medical practitioners and certified experts who have left their profession due to family circumstances and other reasons. Such efforts should be further expanded to secure necessary manpower as quickly as possible.

It would also help to introduce more efficient testing methods. Some local governments have set up drive-through testing facilities, where drivers submit to a series of nasal and throat swabs without leaving their cars. This approach allows many tests without risking in-hospital infections.

South Korea has also introduced walk-through testing stations where swabs are taken in tents set up outside medical facilities.

Currently in Japan, tests are conducted, in principle, only by designated medical facilities. Other hospitals should also be allowed to test and examine potential patients.

It is also important to make preparations for starting tests for coronavirus antibodies. This test is designed to look for protective antibodies in a finger prick of blood to determine whether a patient has ever been infected with the virus, possibly without knowing it, and now may have some immunity.

Some countries are eager to introduce antibody tests, and there is no reason why Japan should not follow suit and start considering how they can be used here.