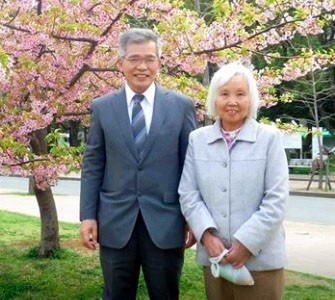 After weeks of sorrow, worries and futile attempts for a reunion, Shingo Yoshida has accepted the possibility that his wife may never remember him again.

“It will be all right as long as I remember who she is,” Yoshida, a 76-year-old resident of Suita, Osaka Prefecture, said on Facebook.

The coronavirus outbreak has prevented Yoshida from seeing his 77-year-old wife, Tamiko, a nursing home resident who has an Alzheimer-type dementia.

Like many other care facilities across the nation, the nursing home has banned visitors to prevent a possible spread of infections among those most at risk from COVID-19.

While couples and families understand the need for such measures, they still lament that they are losing irreplaceable time together.

And they see no end in sight to the public health crisis.

The nursing home where Tamiko resides decided to bar access to residents in mid-February.

The central government on April 7 declared a state of emergency for seven prefectures, including Osaka. Residents in those areas have been urged to refrain from going out.

“I am now mentally preparing myself to be able to accept her as my wife the same way as before, even if she doesn’t remember me,” Yoshida said on his Facebook page in late March.

Yoshida and Tamiko are both ministers who had been very active at a church in the prefecture.

When Tamiko was diagnosed with dementia, she said, “If I lose my memory, I hope I’ll still be myself and keep living.”

Five years ago, she started living at the nursing home.

It then became a daily routine for Yoshida to walk to the care facility from his home to see his beloved wife. There, the couple ate snacks together and strolled in the property.

“I barely understood what she was saying except when she called me ‘Dad,’” Yoshida recalled. “But she was happy when I was around.”

After the nursing home in February asked family members to stop visiting residents except for emergencies, Yoshida had to alter his daily schedule.

He now walks to the nursing home, looks at the building where Tamiko is staying, and then returns home.

The state of emergency is scheduled to last until May 6.

Yoshida is distressed by the thought that he will not see Tamiko any sooner, and that her dementia may progress in the meantime.

Yoshida is hardly alone in such a predicament.

A woman in her 40s who lives in Kobe has been unable to meet her father at a nursing home since early March.

“I am a bit frightened of seeing him the next time,” the woman said.

Her father in his 70s has Lewy body dementia and has lived in the care facility since summer 2019.

The woman, her mother and other family members used to visit him three to four times a week. He had good days and bad days, but he understood who they were and was usually able to have a normal conversation with them.

But the care facility decided to bar access to residents in early March when the first COVID-19 patient was confirmed in the city.

Family members are only allowed to pick up and drop off residents’ laundry at the reception desk.

The woman has thought about calling the facility to ask how her father is doing, but she refrained, thinking the staff must be too busy.

One worker contacted the woman to inform her that her father had fallen down. But other than that, the staff has always told the family, “Everything is fine, as usual.”

Although she is relieved to hear such words and understands the need to restrict visits in light of the infection risk, the woman feels weary and frustrated because the family cannot see for themselves the condition of her father.

“I really want to know how he is doing, at least a little more, by any means possible,” she said.

In this new era of working from home and social distancing, more people are staying in touch through social media and smartphone technologies.

But not all senior residents at nursing homes are up to date on such means of communication. Many have difficulties operating their mobile phones on their own.

Some care facilities that have barred physical reunions have sought alternative ways to keep the families connected.

Daini Seifuen, a company that operates a home for the elderly in Machida in western Tokyo, has started attaching photos of residents as well as hand-written messages from staff to the monthly bills mailed to the residents’ families.

The facility, which has a capacity of 100 residents, recently extended the no-visitor period from the end of March to the end of April.

“Considering the current situation, we may have to extend it again,” said Tatsuzo Kitagawa, head of the Daini Seifuen facility.

He hopes the photos and messages bring some solace to the concerned families.

One resident spoke to her son and her daughter-in-law via a tablet screen, “Are you doing well?”

The scene moved Jun Yoshio, head of the facility.

“Seeing that was heartwarming. I realized the (resident) is still a caring parent,” Yoshio said. “I know it could be a burden on staff, but I want families to feel relieved as much as possible by seeing the residents’ faces.”

The facility started shutting out visitors in late February. Staff send emails to the residents’ families to keep them up to date. They also make sure to attach a photo of the resident to the emails.

But such remedies may not be enough to ease many families’ anxiety, Yoshio admitted.

“Many families used to visit here on a frequent basis, and I cannot help wonder how worried they must have been,” Yoshio said.

A phone conversation may not mean much for residents who cannot recognize their family members only by voice.

At Kaifuso, a nursing home in Saikai, Nagasaki Prefecture, where 65 or so seniors live, residents have been able to see their families through a glass window and talk via a video chat.

The residents come to a dining hall on the first floor, while their families remain outside the building.

The facility banned access to residents at the end of 2019, when staff members came down with the flu. Then the novel coronavirus spread, making it impossible to lift the ban.

Some press their hands to the window to “touch” their loved ones. But many are still frustrated at being unable to hear each other’s voices unless they are screaming.

In late March, staff decided to introduce video chat using Line. They explained the new means of communication on the facility’s website and mailed a flier with the bills for March.

They also asked family members who are not familiar with social media and apps to bring their smartphones to the facility for assistance.

The COVID-19 pandemic has also disrupted communications between hospital patients and their family members, as many medical facilities have tightened restrictions on visitors to prevent in-hospital infections.

Hospital staff have become creative to keep both the patients and family members happy and at ease.

Kumamoto Kinoh Hospital in the capital of Kumamoto Prefecture introduced a video chat service in late March, a month after it imposed a ban on visitors.

The hospital already had a messaging service available via its website before the ban, but it was used only once or twice a month.

After the ban, however, around five messages were sent every day. Some of the messages began with, “I am sorry this is done by email.”

For family members lacking a device to use the messaging service, the hospital has equipped each ward with a tablet computer.

Staff members said they hope the service will help to alleviate the pain and stress of patients and families, even by just a little.

Uchida Hospital in Numata, Gunma Prefecture, banned visitors in early March, but the decision was met by resistance from some patients who felt that the coronavirus outbreak was not a real physical thing, like a natural disaster.

Some family members of the patients also became despondent and expressed anxiety, prompting the hospital to introduce a service called “TV meeting” in a booth on the first floor where there is no medical ward.

Family members can see the patient’s face while having a conversation via a tablet screen.

One such meeting started with both sides in tears, saying, “I have wanted to see you so much!”

“For patients, meeting with family members provides motivation and energy,” a hospital worker said. “We absolutely have to take safety measures, but we will continue to help them as much as possible.”

But for Yoshida in Suita, the walls of the nursing care facility continue to block contact with his wife.

He said that things were difficult even before the pandemic. For example, Tamiko sometimes didn’t recognize Yoshida when he sat next to her.

“In the beginning, I prayed, ‘Please remember me,’” he said. “But now, I keep telling myself that it will be OK. We’ll still be husband and wife because I remember.”

He said he also believes that even if Tamiko cannot remember his name or face, she will recognize him from the bottom of her heart because she knows him better than anybody else.

Recalling the time Tamiko called him Dad, Yoshida said he has a plan for the day when he can see her again.

(This article was written by Takashi Kiyokawa, a senior staff writer, and Yoko Tanaka.)