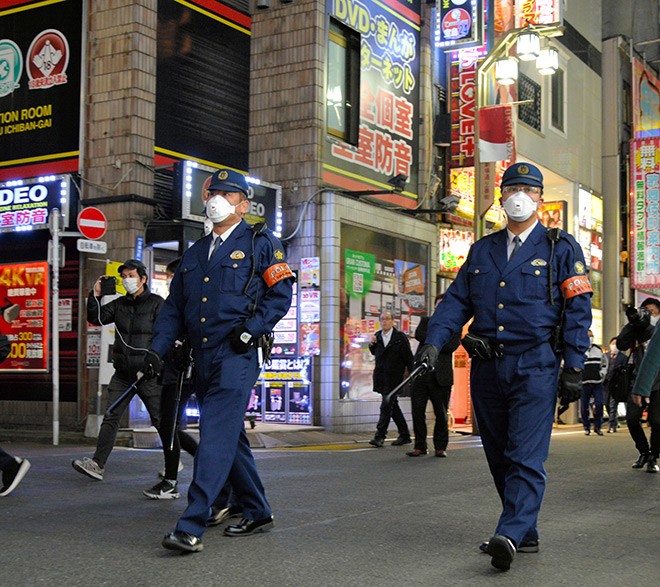 Tokyo police have heightened patrols to thwart looters and thieves, but they are walking a fine line concerning pedestrians who may be ignoring government requests to stay indoors during the novel coronavirus outbreak.

Prime Minister Shinzo Abe’s state of emergency issued on Aug. 7 for seven prefectures, including Tokyo, does not give police any greater authority to enforce the emergency measures. And the seven governors’ requests for businesses to shut down and residents to refrain from going out carry no penalties against those who do not comply.

Three police officers on patrol in Tokyo’s Kabukicho entertainment district on April 10 understood the limits of their authority.

With many businesses in the capital shut down or open for shorter hours, officers are on the lookout for burglars targeting the empty shops.

But the three police officers found few people out in Kabukicho, which is normally crowded on a Friday night, because many businesses, such as night clubs and cabarets, had closed upon Tokyo Governor Yuriko Koike’s request earlier in the day.

The officers, who were wearing face masks during their patrol, came across a group of five or so young people.

“Good evening,” one of the officers said. “A request has been issued to refrain from leaving your homes. We ask for your cooperation.”

The group left the area.

But that is about all the police can do in such situations.

“In principle, all we can do is ask for cooperation regarding the request to remain at home,” a high-ranking officer with the Metropolitan Police Department said. “We have instructed the police officers out in the streets to be careful about what they say so it is not considered coercive.”

On April 8, the National Police Agency sent out a memorandum to prefectural police departments stating what they should be careful about concerning the state of emergency declaration.

The revised special measures law designed to deal with the coronavirus outbreak gave Abe the authority to declare the state of emergency, but it has no provisions regarding greater police powers.

The NPA asked for heightened patrols of entertainment districts and instructed police officers to inform pedestrians about the request to refrain from leaving their homes.

The agency reminded police that their actions would still fall under general laws. It also instructed officers not to ask pedestrians what they are doing in entertainment areas because they may simply be shopping for necessities.

If police officers ask pedestrians what they are doing and tell them to go home, it would constitute questioning undertaken by police as part of their jobs to fight crime.

But under the Police Duties Execution Law, police officers are limited to asking questions that are only directly related to a possible crime.

Asking an individual why they are out walking about would clearly go beyond that restriction, police officials said.

Tokyo police said that with fewer people outdoors after entertainment and leisure businesses shut down or reduced their operating hours, the number of emergency calls has decreased.

However, Tokyo police said the number of 110 phone calls related to the coronavirus outbreak has soared.

The MPD has received about 420 emergency calls related to the coronavirus as of April 8.

There were only about 20 such calls in February, but the number shot up to about 190 in March.

So far in April, Tokyo police have received about 210 coronavirus-related calls.

The word “emergency” does not seem to apply in many of the cases.

Some callers have called police about cherry-blossom viewing parties or groups of people outside without face masks.

Others have complained about noise pollution from businesses that did not shut down as requested by the governor.

(This article was written by Shingo Tsuru, Yosuke Takashima and Shimpachi Yoshida, a senior staff writer.)