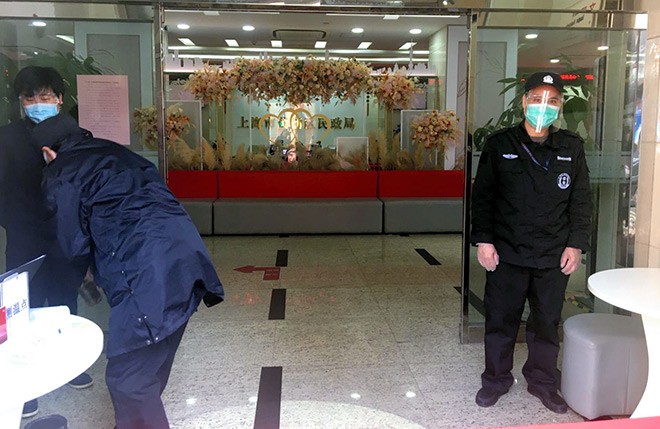 Only those with reservations can enter this Shanghai government office to submit documents for marriage and divorce. The move was taken to avoid congestion as one way to prevent a spread of the coronavirus. (Kanako Miyajima)

The coronavirus outbreak is acting like an accelerant for marriages across Japan and around the world: either setting them ablaze or igniting the flames of passion.

In both cases, companies are cashing in.

Some marriages here are unraveling as quarreling, quarantined spouses find themselves suddenly stuck together at home, leading to an increase in Twitter posts about what are dubbed “corona divorces.” Others are now thinking it might finally be time to tie the knot.

Some companies are providing new services to married people seeking refuge from their own homes. At the same time, matchmaking companies are seeing a surge in requests--a trend also observed during past major natural disasters.

Chatter about corona divorces became more prevalent around late February, and increased when government officials called for citizens to remain home as much as possible to prevent the coronavirus from further spreading.

“My husband’s income has fallen since he began working from home. We are always arguing,” one woman tweeted.

Another woman expressed alarm that her husband was considering going to a drinking party because only a few people were attending.

“I am deeply disappointed at his lack of a sense of crisis,” the woman tweeted.

Another woman complained that her husband, now working from home, expected to have his three meals a day prepared and served to him while “he does nothing.”

Disgruntled husbands are also whining about their new working conditions.

“I will be together with my wife until the end of the Golden Week series of national holidays. I feel I might suffocate,” one man tweeted.

“My wife says she hates it when I am in the same space as her because she feels she is about to get an allergic rash, so I end up eating spaghetti on the kitchen floor,” another man tweeted. “I feel like dying when I hear the happy voices of my children in the other room.”

One couple in their 30s are now both working from their Tokyo home. Their 7-year-old daughter is also home from school.

“Our living room is very congested,” the wife said. “I don’t know what to do about videoconferences, where confidential information may come out, because our home is so cramped.”

She said arguments have sparked over how to divide the household chores, even though they cooperated in the past.

“We don’t go out, so we have no new topics of conversation. It is painful.”

But it has recently started a new service for those seeking refuge from their married life at home.

The units are fully furnished and come with internet service.

Although the service only begun on April 8, Kasoku has already received about 80 inquiries.

Some are desperate pleas for help. One urgently requested a room to rent until May.

Even company President Keisuke Arai, 28, recently broke up with his girlfriend, whom he lived with, because he was forced to spend more time at home with her.

While some marriages and relationships are going up in flames, others are raising concerns about a rise in domestic violence seething below the surface due to the coronavirus outbreak in Japan and abroad.

The United Nations issued a report on April 7 about an increase in domestic violence cases stemming from more families at home due to lockdowns. Singapore and Cyprus reported 30 percent increases in consultation calls about domestic violence.

Because of the wide-ranging economic effects from the coronavirus outbreak, some scholars are sounding the alarm that it could be devastating for many women here.

“I am worried about more women becoming impoverished because they hold nonregular positions in the service sector,” said Masahiro Yamada, a professor of sociology of the family at Tokyo’s Chuo University.

Half of working women hold nonregular positions, as opposed to full-time, direct employment with companies, according to a 2019 study by the Ministry of Internal Affairs and Communications.

PHONES RINGING OFF THE HOOK

While some relationships are ending, others are starting to bloom.

O-net Inc. is an established matchmaking service provider that’s been around for 40 years.

The company said it is receiving calls from people worried about being alone. Others told the corporate cupid they always thought about marriage but now they think the time has finally come.

Tokyo-based Marry Me has seen a 20 percent increase in inquiries since the coronavirus outbreak began.

“I believe that a crisis serves as a catalyst for more people to think seriously about how they want to lead their lives,” said Miyuki Uekusa, who heads the company.

She said being quarantined at home is also a good opportunity for married couples to strengthen their relationships.

“They should think about deepening their bond by starting projects that require cooperation, such as preparing complicated dishes or doing a thorough house cleaning,” Uekusa said.

(This article was written by Natsuki Edogawa and Masayoshi Hayashi.)