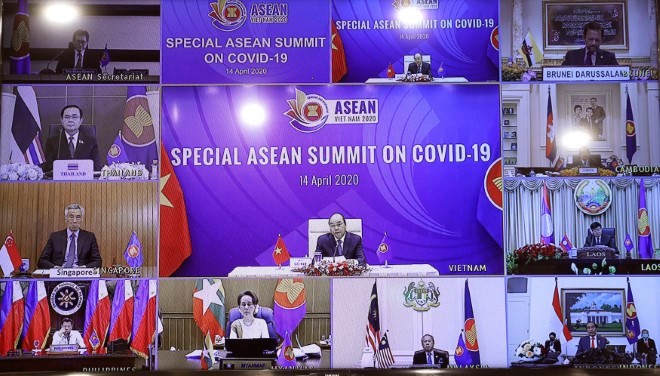 HANOI--Forced apart by the coronavirus pandemic, Southeast Asian leaders linked up by video Tuesday to plot a strategy to overcome a crisis that has threatened their economies and kept millions of people in their homes under lockdowns.

The heads of state of the 10 members of the Association of Southeast Asian Nations were to hold further talks later Tuesday, also through video conferencing, with their counterparts from China, Japan and South Korea who are expected to express their support in helping ASEAN fight the coronavirus. Vietnam, ASEAN’s leader this year, has postponed an in-person gathering tentatively to June.

“It is in these grim hours that the solidarity of the ASEAN community shines like a beacon in the dark,” Vietnamese Prime Minister Nguyen Xuan Phuc said in an opening speech.

Containment efforts have placed the pandemic “actually under control,” he said, warning against complacency, with a number of member countries, including Indonesia and the Philippines, fearing spikes in infections after large-scale testing is conducted.

Founded in 1967 in the Cold War era, ASEAN--a diverse bloc representing more than 640 million people--has held annual summits of its leaders and top diplomats with ceremonies steeped in tradition, protocol and photo-ops. Derided as a talk shop by critics, the bloc is known largely for photographs of its leaders locking arms at annual meetings in a show of unity despite often-thorny differences.

Diplomats say that unity is now crucial as the region battles the COVID-19 disease. All of ASEAN’s member states have been hit by infections, with the total number of confirmed cases reaching more than 20,400, including over 840 deaths, despite massive lockdowns, travel restrictions and home quarantines.

“The COVID-19 crisis is a crisis like no other in the past, not just in its potential calamitous scale but in the hope to contain and stop it by unstinting cooperation and fullest trust between all countries,” said the Philippines’ Department of Foreign Affairs. “If any of us fails, the rest will follow.”

The World Health Organization called on Southeast Asian countries last month to aggressively ramp up efforts to combat the viral outbreak as infections spread. Several visiting participants of a large religious gathering in Kuala Lumpur, Malaysia, in late February reportedly tested positive for the virus after attending the event.

But Vietnamese Foreign Minister Pham Binh Minh said ASEAN had responded to the outbreak quickly, with his country, as the bloc’s current leader, calling for the need for region-wide action in mid-February, followed by a series of ministerial meetings and consultations with China, the United States and the WHO.

“Countries in our region have all suffered severe consequences from COVID-19,” he said. “We have made every effort to combat this pandemic.”

Tuesday’s summit was to include discussions on a regional stockpile of medical equipment for emergencies and establishing a regional fund for combating the pandemic.

With travel restrictions and lockdowns across the region, many industries have been hit hard, including the tourism and retail sectors, and growth targets have been revised downward. The overall economic impact of the pandemic on the region will “likely be broad and deep,” according to an ASEAN assessment.

Hard-hit China, where the virus was first detected in December, is one of the largest trading partners and sources of tourists for Southeast Asia.

ASEAN holds about 1,500 meetings a year, but around 230 have been postponed to later this year due to the pandemic, including lower-level meetings with China on a proposed nonaggression pact in the disputed South China Sea.

The territorial disputes, which involve China and five other claimant states, including ASEAN members Brunei, Malaysia, the Philippines and Brunei, are not part of the formal summit agenda. But the disputes have cast a shadow on the summit after a Vietnamese fishing boat with eight men on board was hit by a Chinese coast guard ship and sank near the Paracel islands. All the fishermen were rescued.

The other ASEAN members are Cambodia, Indonesia, Laos, Myanmar, Singapore and Thailand.