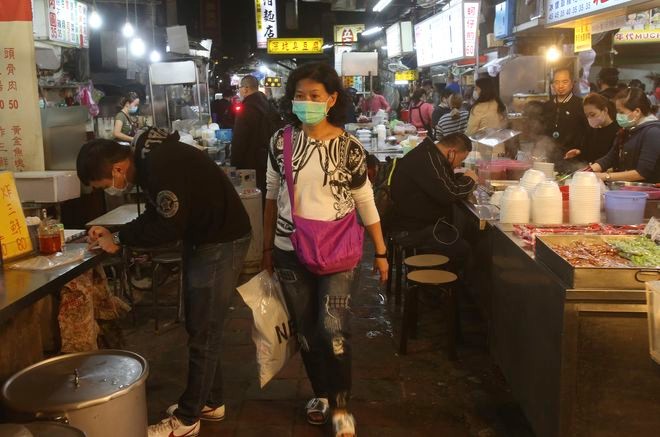 People wear face masks to help curb against the spread of the coronavirus and visit at a night market in Taipei on April 8. (AP Photo)

TAIPEI--Taiwan on Tuesday reported no new cases of the coronavirus for the first time in more than a month, in the latest sign that the island’s early and effective prevention methods have paid off.

Taiwan has won plaudits from health experts for how it has fought the virus, including starting as early as Dec. 31 checks on passengers arriving from China’s Wuhan city, where the first cases were reported late last year.

Taiwan has reported 393 cases to date, and six deaths. A total of 338 were so-called imported cases, where people were suspected of getting infected overseas before entering Taiwan, with the rest cases of local transmissions.

“Of course, we hope it has passed,” Health Minister Chen Shih-chung told a news conference, referring to the virus on the island. “But we still need to be on our guard. Of course, we feel happy at no new cases today.”

Chen said the last time Taiwan reported no new cases was March 9, after which numbers spiked for a time with people coming back to the island from places now reeling from the virus in Europe and the United States.

The number of people discharged after they were diagnosed with the coronavirus has reached 124, Taiwan’s government added.

However, restrictions remain in place, such as compulsory 14-day quarantines for all arrivals onto the island, and the number of international flights has fallen dramatically.

Taiwan has not gone into total lockdown because of the virus and life has continued relatively normally, though the government has promoted social distancing and mandated the wearing of face masks on public transport.