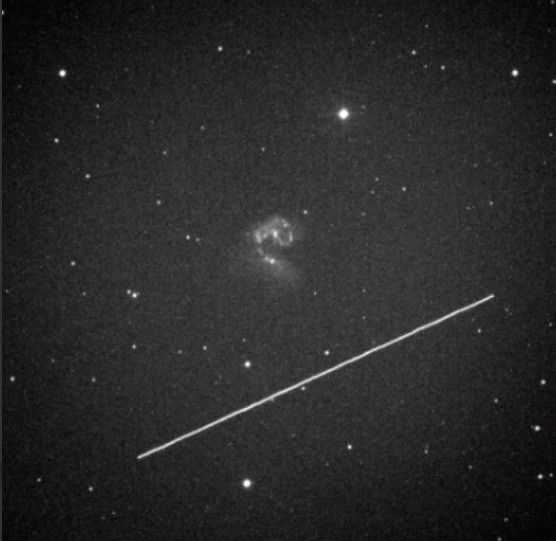 Mercury probe Mio is seen making a swing by near Earth in an image taken with an exposure time of 30 seconds with a telescope in the United States remotely controlled by Takeshi Inoue, director of the Akashi Municipal Planetarium in Hyogo Prefecture. (Provided by Takeshi Inoue)

Japan's Mio space probe now en route to Mercury to study its origin and evolution took advantage of Earth's gravity for a swing by to take a farewell photo of home.

Photos showing it whizzing far above Earth were also taken on April 10.

The probe, created and operated by the Japan Aerospace Exploration Agency (JAXA), is expected to enter Mercury's orbit in December 2025.

Mio had to drastically change in its flight path by coming to within 12,600 kilometers of Earth--about the same length as that of the planet's diameter--at 1:30 p.m. Japan time.

The University of Tokyo's Kiso Observatory in Nagano Prefecture photographed Mio departing high above the southern sky just before 9 p.m. through its large telescope.

It was the probe's first and final swing by using Earth's gravitational pull.

Mio will make two more similar maneuvers around Venus and six around Mercury.

JAXA launched the probe in October 2018, along with a European probe called MPO, as part of the Japan-Europe joint BepiColombo mission to research Mercury. The mission was named after an Italian astronomer.

The probe has flown 1.4 billion kilometers of the total 9-billion-kilometer route of its 7-year voyage.

Mio's mission is to survey Mercury's magnetic field and other conditions on the planet, which has an extremely harsh environment.

As the closest planet to the sun, Mercury is exposed to strong plasma waves and its surface temperature measures up to 430 degrees.