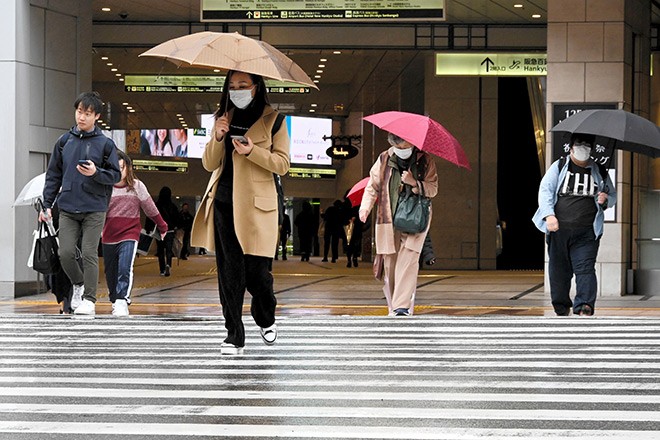 Few people are seen on the streets of Osaka’s Umeda district on April 13, a week after a state of emergency was declared over the new coronavirus outbreak. (Nobuhiro Shirai)

People in urban areas under a state of emergency are practicing social distancing, but new data suggests they are not doing enough of it on weekdays to meet the government's target to keep the coronavirus outbreak in check.

The number of people going out on weekdays has dropped by 30 to 60 percent, but that is still far below the central government’s target of the 70 to 80 percent reduction needed to contain the spread of infections.

The data was collected over a week after Prime Minister Shinzo Abe declared a state of emergency over the outbreak on April 7 for Tokyo, as well as Saitama, Chiba, Kanagawa, Osaka, Hyogo and Fukuoka prefectures.

The declaration has greatly affected people’s lives in those areas, where central and prefectural governments have asked residents to refrain from nonessential outings and requested some businesses to temporarily close.

But the central government is increasingly alarmed at the new figure, since it suggests the country has yet to achieve Abe’s target of reducing direct human contact by “at least 70 percent and up to 80 percent.”

“We need to ask the public for further cooperation,” Chief Cabinet Secretary Yoshihide Suga said, responding to the results at an April 14 news conference.

The state of emergency is expected to be lifted on May 6, although Abe said he is assessing the situation daily.

“I will decide (when to lift the state of emergency) by analyzing data each day and taking into account experts’ opinions,” Abe said at the Lower House plenary session on April 14.

He said there are no statistics on the reduction in human contact, but they do have data on people’s movement, obtained from location information of their mobile phones, which the government is using as a yardstick for measuring how much people are moving around.

The location data does not fully reflect reductions in contact. But to get a rough idea, the government is looking at an average volume of daily human foot traffic and comparing it against “pre-pandemic” data taken at 3 p.m. on weekdays from Jan. 18 through Feb. 14.

The government has been monitoring changes in location data at 10 major areas in prefectures under a state of emergency since April 8--a day after the declaration.

Movement volume decreased by only 30 to 60 percent on weekdays.

On April 13, for example, foot traffic volume in Osaka’s Umeda district reduced by 67.7 percent, the largest among the 10 locations. But it still fails to reach the 70 percent mark. The figure for Kobe’s Sannomiya district was the smallest, at 47.6 percent less traffic.

The number has not dropped much on weekdays, when many people go to work, compared to weekends, when most businesses are closed.

“We (want to) achieve the 80 percent reduction (in human contact) through efforts by individuals,” Yasutoshi Nishimura, the state minister of economic revitalization who is in charge of containing the outbreak, told reporters on April 14. “I believe in Japanese people’s power.”

A senior government official said, “All that we can do is keep a close eye on the data while reacting to the daily number of new infections.”