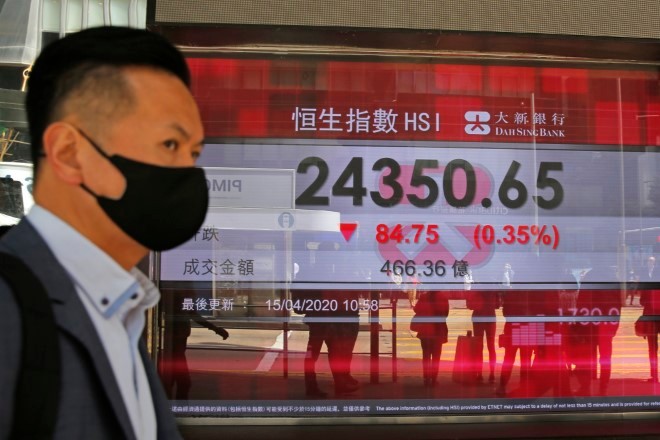 A masked man walks past an electronic board showing the Hong Kong share index outside a local bank in Hong Kong on April 15. (AP Photo)

Asian stocks skidded Wednesday after the International Monetary Fund said the global economy will suffer its worst year since the Great Depression of the 1930s due to the coronavirus pandemic.

The IMF’s latest forecast said this year’s global economic output will shrink by 3 percent, a bigger loss than 2009’s 0.1 percent decline. That was a marked reverse from the Fund’s previous forecast in January of 3.3 percent growth before the virus prompted governments to shut down factories, travel and other industries.

“The IMF forecast a deep economic winter,” said Hayaki Narita of Mizuho Bank in a report. Narita said, however, investors appear to be looking past that to the IMF’s outlook for a “spring-back in growth” to 5.8 percent next year.

The IMF’s chief economist, Gita Gopinath, said the loss to global gross domestic product, the broadest gauge of economic output, could amount to $9 trillion, or more than the economies of Germany and Japan combined.

On Wall Street, the benchmark S&P 500 index climbed 3.1 percent on Tuesday to 2,846.06. The benchmark index surged 12 percent last week, though it is about 16 percent below its all-time high set in February.

Johnson & Johnson climbed 4.5 percent after reporting a stronger profit for the first three months of the year than Wall Street expected. It raised its dividend, bucking a trend as companies try to conserve cash, even though the health care giant also had to slash its outlook.

Investors are focusing on how and when authorities may begin to ease business shutdowns and limits on people’s movements imposed to slow the spread of the coronavirus.

U.S. President Donald Trump has been discussing with officials how to roll back federal social distancing recommendations that expire at the end of the month. And governors around the United States have begun collaborating on plans to reopen their economies in what is likely to be a gradual process to prevent the coronavirus from rebounding.

The discussions follow signs the outbreak may be leveling off in some of the hardest-hit areas, including New York City.

In Italy, Spain and other places around Europe where infections and deaths have begun stabilizing, the process of reopening economies is already under way. Some businesses and industries are allowed to reopen in a calibrated effort aimed at balancing public health against their countries’ economic well-being.

China has reopened factories, shops and other businesses after declaring victory over the outbreak while the United States and Europe still are tightening controls. Still, forecasters say it will be months before Chinese industries return to normal output and exporters will be hurt by depressed global demand.

While Wall Street expects profits will be down for most companies in the S&P 500, the focus is on what management teams have to say about what profits look like for the rest of the year.

Analysts are forecasting a drop of roughly 10 percent in earnings per share for S&P 500 companies for the first quarter and 21 percent for the second quarter.