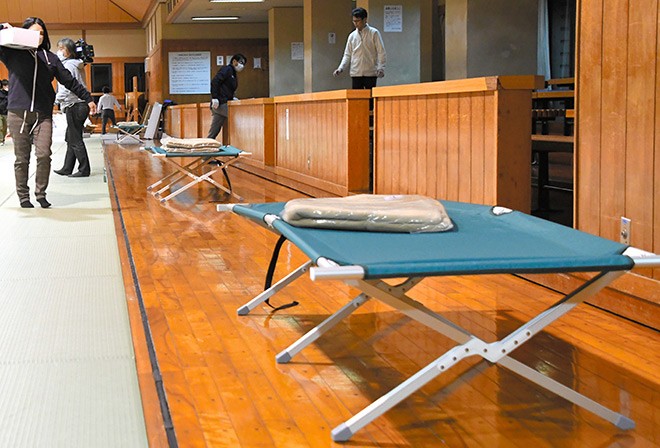 Simple beds are provided at a safe distance from each other at Kanagawa Prefecture’s Budokan martial arts facility in Yokohama. (Asahi Shimbun file photo)

YOKOHAMA--The Self-Defense Forces came in for rare criticism from the governor of Kanagawa Prefecture after a PR official tried to recruit new members at a temporary shelter accommodating internet cafe users with nowhere to stay at night while the new coronavirus rages.

As a measure to prevent the virus from spreading further, the Kanagawa prefectural government opened the doors of its Budokan martial arts gym for the people who lack proper accommodation.

"It was extremely insensitive," Kanagawa Governor Yuji Kuroiwa said at an April 14 news conference in reference to the issue.

Kanagawa prefectural authorities requested internet cafes to close their businesses temporarily from April 11 after the central government declared a state of emergency and opened its Budokan facility to those in need.

The PR official visited the Budokan facility by himself around noon on April 13 with the aim of attempting to recruit new members, but was stopped from entering by a prefectural official.

For the next several minutes, the man kept pestering the official for his cooperation.

Kuroiwa, voicing his annoyance, noted that internet cafe users with nowhere to stay at night are finally able to use the gymnasium. He said it was essential they should be able to rest there without people intruding on them.

Kuroiwa said he has been cooperating with SDF recruiting activities and had asked the organization to "play by the rules."

(This article was written by Yoshinobu Motegi and Shigehiro Saito.)