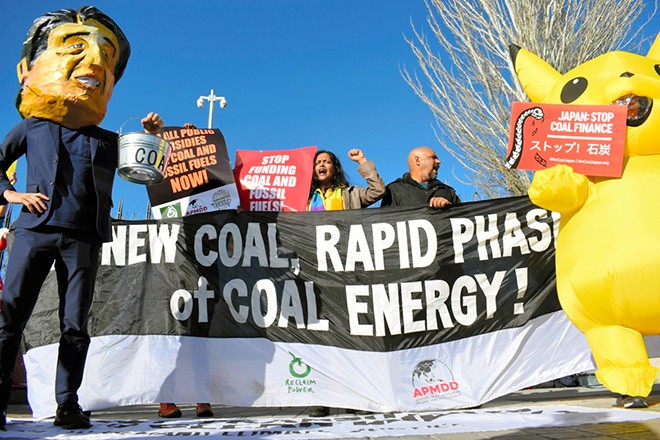 Environmental activists from around the globe protest Japan’s plan to build additional coal-fired power plants and the export of such plants in front of the COP25 climate change conference venue in Madrid in December. (Provided by FoE Japan)

In line with global efforts to reduce carbon dioxide (CO2) emissions, Mizuho Financial Group Inc. announced on April 15 it will stop investing in and lending to new coal-fired power plants from June.

The group, one of Japan’s three megabanks, plans to cut by half the outstanding balance of about 300 billion yen ($2.8 billion) by fiscal 2030 and reduce it to zero by fiscal 2050.

Mizuho will step up efforts for decarbonization as many financial institutions around the globe have started reviewing their investments and loans to coal power plants. The plants emit massive amounts of CO2, a major contributor to global warming.

The group will revise its financing guidelines to include the new policy and target of investments and loans to coal power plants. The revised guidelines will take effect in June. Mizuho will not, in principle, allow its borrowers to refinance their loans for these projects.

Megabanks in Japan had invested in and loaned heavily to coal power plants, but they are under mounting pressure from investors to show more commitment to decarbonization.

Mizuho also set a new target of 25 trillion yen in investments and loans to renewable energy businesses that contribute to encouraging environmental, social and corporate governance (ESG) activities, as well as achieving the U.N. sustainable development goals (SDGs), from fiscal 2019 through fiscal 2030.