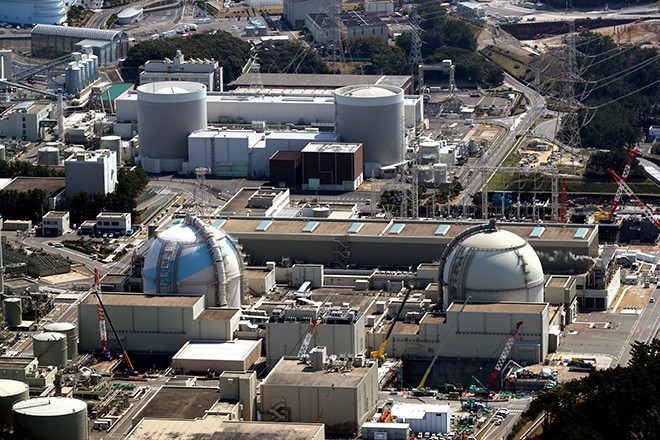 The Genkai nuclear power plant’s No. 3, left, and No. 4 reactors in Saga Prefecture on March 17 (Asahi Shimbun file photo)

Kyushu Electric Power Co. suspended work to build an anti-terrorism facility at its Genkai nuclear power plant in Saga Prefecture after a worker there tested positive for the novel coronavirus on April 14.

The infected construction worker was involved in the project, which is required under stricter safety standards for nuclear power plant operations, the company said April 15.

All civil engineering work at the nuclear plant was halted on the night of April 14, and the company said it does not know when it can restart the project.

The infected worker is a male employee in his 50s of leading construction company Obayashi Corp., Kyushu Electric said.

He is a resident of Karatsu city in Saga Prefecture and was among the new coronavirus cases reported by the prefectural government on April 14.

He has not worked at the plant since April 10, when he complained of illness.

After the utility was informed about the infection from the construction company, it ordered about 300 other workers who may have come in contact with their infected colleague to stay home. They include Kyushu Electric employee and those commissioned to work on the anti-terrorism project.

The company said the infection would have no effects on the operations of the nuclear power plant.

Under the tougher safety standards imposed after the 2011 disaster at the Fukushima No. 1 nuclear power plant, utilities are obliged to construct anti-terrorism facilities for reactors at their nuclear plants.

For the Genkai nuclear plant, the completion deadlines for the No. 3 and No. 4 reactors are August and September 2022, respectively.

The company said it has no idea if the suspension of work will affect the project schedule.