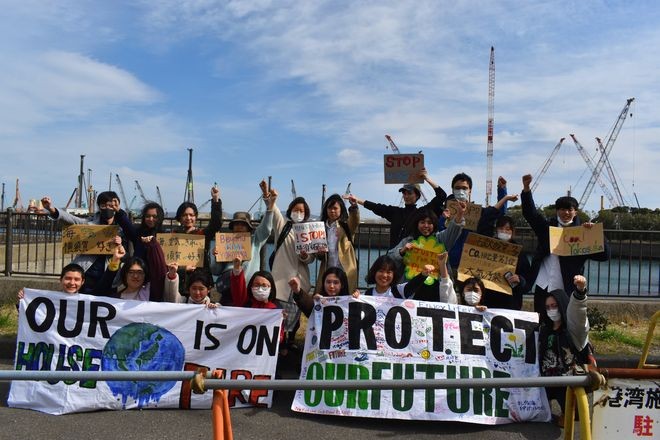 Members of the Yokosuka branch of “Fridays for Future” hold a protest on March 13 in front of the proposed site of a coal-fired thermal power plant in Yokosuka. (Provided by Yayako Suzuki)

The novel coronavirus pandemic has forced the postponement of this year’s U.N. Climate Change Conference (COP26), but it has not prevented young Japanese from continuing their calls for action against global warming.

Inspired in part by Greta Thunberg, the 17-year-old Swedish environmental activist, Japanese around the same age are trying to engage adults in coming up with solutions to prevent catastrophic damages from climate change.

They are now taking precautionary measures against the virus, such as using the internet, in their activities.

On March 13, about 20 young Japanese gathered in front of the Yokosuka city government building.

They yelled “Stop Yokosuka’s coal-fired thermal plant” and “Beyond coal” through face masks worn to prevent the spread of coronavirus infections.

The demonstration called for the scrapping of plans to construct a coal-fired thermal power plant in the city located in Kanagawa Prefecture, southwest of Tokyo.

According to the International Energy Agency, coal-fired thermal plants are the energy source that produces 30 percent of carbon dioxide emissions, a major cause of global warming.

And in fiscal 2017, Japan depended on such plants for 32.3 percent of its electricity.

One organizer of the rally was Yayako Suzuki, 21, a third-year university student who lives in Yokosuka.

Last summer, Suzuki joined an event in Canada that allowed her to interact with young people from around the world and heightened her interest in social issues.

After returning to Japan, she took part in a study session set up by an international environmental nongovernmental organization, through which she learned about the plan to build a coal-fired thermal plant in Yokosuka. Suzuki said she felt a responsibility to do something.

In February 2020, she established the Yokosuka branch of “Fridays for Future,” an international movement inspired by Thunberg’s call to school children to go on strike because adults were not doing enough about climate change.

Yokosuka is the political base of Environment Minister Shinjiro Koizumi.

Suzuki’s group plans to send a letter to Koizumi asking for a withdrawal of the thermal plant plan. The group also intends to visit local public schools to conduct “lectures” to teachers to explain the importance of environmental education.

Many young Japanese who hold a sense of crisis over climate change feel that they alone cannot change society. That has led to various efforts to cooperate with older generations.

Isao Sakai, 19, is one of the main members of a group that organizes a global climate march to call for greater measures to deal with climate change.

In September 2019, his mother, Yukiko, a 55-year-old company owner who lives in Tokyo’s Nakano Ward, took part in the march for the first time.

When Isao was in senior high school, he studied for a time in the United States, where he learned about the global environment. That experience led him to start saying, “The measures being taken by Japan now will not be enough.”

Yukiko heard these words from her son.

“I felt his words were blaming me,” she said. “Parents cannot be insensitive to the concerns raised by their children.”

Yukiko told her friends and associates about the march, and five agreed to take part. The first march held in February 2019 attracted only 20 people, but the fourth one in September that Yukiko joined had about 2,800 participants.

The principal offered an individually wrapped candy to then second-year student Ririko Kato, 17.

Sakurada was surprised when Kato replied: “I do not eat these things. Rather than individually wrapped ones, I will eat candy that comes in a large bag.”

Kato and two other female students are involved in efforts to reduce garbage as much as possible.

One of those students, Yuki Yokogi, 17, went up to Sakurada and said, “We want a water refill station in school because that would lead to a reduction in plastic bottles.”

The school installed six such machines, leading to an increase in students and teachers who brought their personal drink bottles to school.

The group holds games in which participants find issues related to the U.N.’s Sustainable Developments Goals (SDGs) that member nations have pledged to meet by 2030. Among the 17 goals are “climate action.”

Yamaguchi has been participating in SDGs-related events on an almost weekly basis from when he was 13. That led him to emphasize forming ties with companies and private-sector organizations that have an interest in the SDGs.

So far, his group has held events while cooperating with a total of 26 companies and organizations, including Cookpad Inc., which operates a website offering various recipes.

With the global spread of the coronavirus, Thunberg called on young people planning to hold environment protection demonstrations to use social media instead.

Yamaguchi’s group will hold an event over the internet on April 29 to reduce the use of plastic bottles by cooperating with Tokyo-based Social Innovation Japan, a nonprofit organization that has developed the “my mizu” app that helps users find free water refilling stations using their mobile phones.