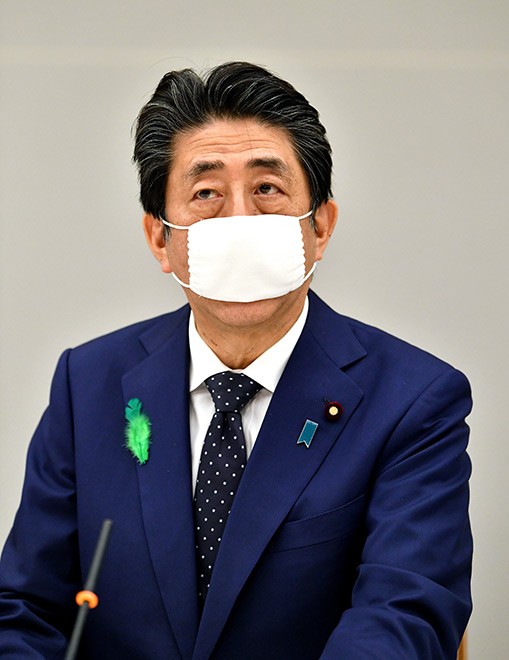 Prime Minister Shinzo Abe, at an April 16 government task force meeting, declares the state of emergency will be expanded to cover the entire nation. (Takuya Isayama)

Prime Minister Shinzo Abe’s decision to extend the state of emergency to all 47 prefectures could be in part because of lessons learned from a three-day national holiday in March, which is believed to have led to a sharp spike in coronavirus infections.

Some experts warn a similar outbreak after the upcoming Golden Week national holiday period in May could spell doom for efforts to contain the virus, which could spread further and overwhelm rural health care systems.

“With the Golden Week (of national holidays) coming up, if another similar surge occurred, that would be the end,” said a member of the government’s expert panel.

Abe said he expanded the scope of the state of emergency ahead of Golden Week to curb travel across the nation.

“The measure is being expanded to all prefectures from the standpoint of keeping to the absolute minimum the movement of people during the (May) series of national holidays,” Abe said when explaining the expansion made on April 16.

Over the course of the March 20 three-day weekend, people in major urban areas were out and about enjoying themselves despite concerns of the coronavirus spreading.

Experts said the sharp increase in new coronavirus infections in April was likely due to the large movement of people in March, given that it usually takes about two weeks between initial infection and a positive test result.

The prime minister said he hoped prefectural governors would ask their residents to stay inside their homes as much as possible as one way to prevent the further spread of the coronavirus.

Declaring a state of emergency gives prefectural governors the authority to ask residents and businesses to cut back on outings and business hours.

Abe declared the state of emergency after a meeting with a panel of experts on infectious diseases.

One expert panel member said after the meeting that the March holiday fun resulted in the coronavirus coming back with a vengeance as infections surged across the country in April.

Health ministry data analyzed by The Asahi Shimbun shows a clear difference in infections after Abe declared a state of emergency for seven prefectures on April 7.

The total number of infected individuals in those prefectures on April 15 is more than double the figure for April 7. A similar trend was found in other prefectures that were not yet subject to a state of emergency.

But the rate that infections were increasing varied by region. In the five prefectures of Yamagata, Shizuoka, Hiroshima, Kagawa and Okinawa, new cases doubled within four days.

One cause of the spread of the coronavirus in rural regions is infected individuals traveling there from major urban areas.

A man living in Tokyo returned to his family home in the Tohoku region and then tested positive for the virus. That led to another dozen or so new infections, as the man’s family and friends were part of a cluster infection.

Even a slight increase in infections could have devastating effects on the medical systems in less populated prefectures.

“There are many areas outside of Tokyo that have very fragile medical care structures,” said Nobuhiko Okabe, director-general of the Kawasaki City Institute for Public Health, and a member of the government’s expert panel.

Some other experts were divided over the timing of expanding the state of emergency to the entire nation, a move that could hurt the economy.

“Rural areas do not have many hospital beds to begin with,” said Reiko Saito, a professor of public health at Niigata University. “So, if infections spread within a core medical institution in the prefecture, the possibility would arise of that prefecture losing its ability to accept new patients.”

She added the latest move should lead people around the nation to take greater efforts to prevent the virus from spreading.

But Satoshi Hori, a professor specializing in controlling infections at Juntendo University, questioned expanding the state of emergency to the entire nation, since that would have even greater negative economic effects.

“Unless the spread of infections in major urban areas, such as Tokyo, is controlled, the coronavirus will end up spreading to other regions,” he said.