Doctors use AI software to assist with gallbladder operations 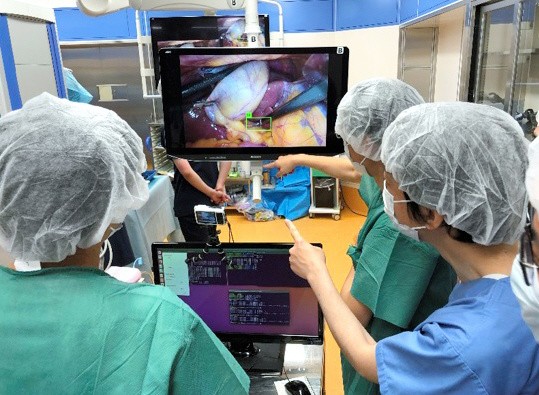 A surgery performed with an endoscope using an AI system (Provided by Tatsushi Tokuyasu, professor at Fukuoka Institute of Technology)

OITA--Researchers are developing a medical software system that combines the use of artificial intelligence and an endoscope to help surgeons safely remove gallbladders, a common surgery in Japan.

Doctors using AI to diagnose patients are increasing in the world, but using it to assist with a surgical procedure is a pioneering step in the operating room, experts say.

The AI-assisted surgery program was developed by a team of researchers from Oita University, the Fukuoka Institute of Technology and Olympus Corp., a manufacturer of optoelectronic products.

The team hopes to bring the technology into practical use within five years.

“We have worked very hard, as we believe that the system will help save more lives,” said Tatsushi Tokuyasu, professor of information technology at Fukuoka Institute of Technology, who is involved in the project. “We are determined to bring the system to fruition.”

During a recent surgery, a monitor set up in front of doctors automatically brought up multiple square frames displaying a patient’s internal organs.

One frame showing an organ serves as a guide for properly accessing the gallbladder, while another points to an area doctors need to be careful not to damage by accident.

The AI judges when to show those frames live, depending on the progress of the surgery.

According to the Japan Medical Safety Research Organization and other health care related groups, about 120,000 gallbladder removals are performed annually, making them the most common surgery.

About 600 cases a year occur where doctors unwittingly cut a bile duct near the gallbladder. In some cases, patients died from their botched operations.

Many of the errors are attributed to doctors mistaking some organs as something else.

Doctors follow a set of procedures when performing a surgery, but the state of organs varies from one patient to the next, depending on the degree of inflammation of the gallbladder and thickness of fat enveloping the organs.

Doctors at Oita University held workshops where they cautioned colleagues about mistakes to watch for when removing a gallbladder.

To help more doctors, they developed the system where AI assists surgeons during surgery, based on the knowledge and techniques of experienced doctors.

The team embarked on the project in 2017.

Yukio Iwashita, lecturer of hepato-biliary-pancreatic surgery at Oita University’s medical school, fed the software some 10,000 pictures of organs from the footage of about 100 operations performed at the university so the AI could identify their locations.

The system was tested during gallbladder removal procedures in December 2018 and September 2019. Doctors were able to use it to safely identify organs.

The research team plans to work with more hospitals to perform more operations using the new system and to release the AI-assisted surgery program within five years.

The researchers are also working on expanding their system’s application beyond just gallbladder surgery to stomach and colon operations as well.

“The technology under development is designed to help inexperienced doctors safely perform a surgery,” said Masafumi Inomata, professor of digestive system surgery with Oita University’s medical school, who is also participating in the project.

The system comes with a built-in fail-safe function. It will block surgical procedures by locking the forceps in place if a doctor moves to cut a blood vessel or make other errors.