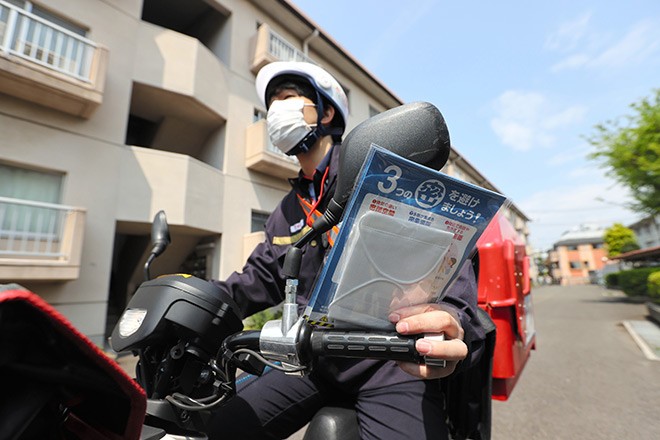 “Abenomask,” a pillar of the prime minister’s package of measures to counter the novel coronavirus, started in some areas of Tokyo on April 17.

Under the plan announced by Prime Minister Shinzo Abe on April 1, postal workers will distribute two cloth masks to each household in Japan to ease anxieties about the outbreak and prevent the spread of the virus.

Although the schedules for the mask deliveries have not been decided for many areas of the country, the health ministry said “it expects the masks to be delivered across the nation within May.”

As a first step, 150,000 sets of masks were delivered to four post offices in Tokyo’s Setagaya Ward on April 16.

Distribution began the following day and is scheduled to be completed within next week. The 150,000 sets will cover only a third of all Setagaya households.

The health ministry said areas with high numbers of infected patients will receive priority for the mask deliveries.

Setagaya Ward has more than 200 infected patients, the most in the capital, followed by Minato and Shinjuku wards, where the delivery of masks will start soon.

The masks will be distributed through the existing service network of Japan Post Co.

The government has said the cloth masks, which can be washed and reused, will help to address the shortage of face masks in Japan and put people’s minds at ease as the infection numbers rise.

However, the plan was derided on social media as insufficient and out of touch. The measure was mockingly called Abenomask, which means “Abe’s mask” and was a play on his Abenomics package of economic measures.