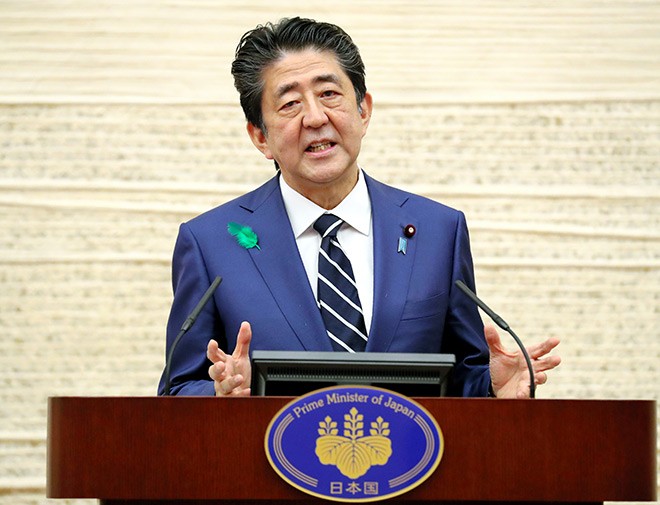 Prime Minister Shinzo Abe explains his decision to extend the state of emergency concerning the coronavirus outbreak to the entire nation in an April 17 news conference. (Takeshi Iwashita)

Prime Minister Shinzo Abe apologized for a sudden turnaround regarding cash payments to those affected by the coronavirus outbreak, pledging an across-the-board payment of 100,000 yen ($930) to everyone in Japan rather than 300,000 yen only for needy households.

Abe held a news conference on April 17 to explain his decision a day earlier to expand a state of emergency declaration covering the entire nation.

He also announced on April 16 that his initial plan to provide cash payments to households that lost income due to closed business operations caused by the coronavirus outbreak would be replaced by the onetime smaller payment to all citizens. Full details of how the package will work are still being fleshed out.

“I take responsibility for creating confusion during the process leading up to the decision,” Abe said. “I extend my heartfelt apology to the people.”

The abrupt change in policy came after the Abe Cabinet approved a package of emergency economic measures to deal with the coronavirus outbreak that included payments of 300,000 yen to households. But that measure was criticized as only going to a few people when everybody was affected by the health scare.

A supplementary budget that was to have been submitted to the Diet next week will now have to re-written, a rare occurrence, and Abe said submittal to the Diet would likely be delayed by about a week.

About 14 trillion yen will be set aside in the supplementary budget for the new cash payments.

Abe also explained that applications to receive the cash payments would be accepted over the internet or by mail to avoid having large numbers of residents converge on their respective local government offices.

At the same time, Abe explained that he had extended the state of emergency to the entire nation due to the need to stop people traveling in large numbers during the Golden Week holiday period that will begin later this month.

“I expanded coverage (of the state of emergency) to the entire nation so that various prefectures will be able to implement measures to prevent a major flow of people into their prefectures,” Abe said.

While he had earlier called for reducing contact with others by at least 70 percent or a more optimum 80 percent, Abe acknowledged those levels were not being met.

With regard to Golden Week that ends May 6, Abe said: “We must absolutely avoid a situation in which people from urban areas, where infections have risen, go to outlying prefectures. That could create a situation we most have to fear, which is a nationwide and rapid increase in new infections.”

Abe also indicated that doctors, nurses and others helping treat those with severe symptoms from the COVID-19 disease would have the remuneration they receive doubled.

Health ministry officials said government-set medical fees would be doubled from April 18 for treatment of patients with severe symptoms.

The state of emergency for the entire nation will be in place at least until May 6.

But Shigeru Omi, chairman of the government panel of experts on infectious diseases that is advising the Abe Cabinet, said it was too early to judge whether the period covered by the state of emergency declaration should be extended.

Omi, who joined Abe at the April 17 news conference, said that about a month would be needed from the initial April 7 declaration of a state of emergency covering seven prefectures to determine if the calls to reduce contact with other people had been followed as well as to assess how the rate of new coronavirus infections had changed.

Omi said the panel would submit its recommendations to the government after analyzing the data around May 6.

Abe added that no definitive statement could be made now about when the state of emergency would be lifted, saying only that the panel’s view would be taken into consideration in deciding whether and for how long to keep the measure in place.