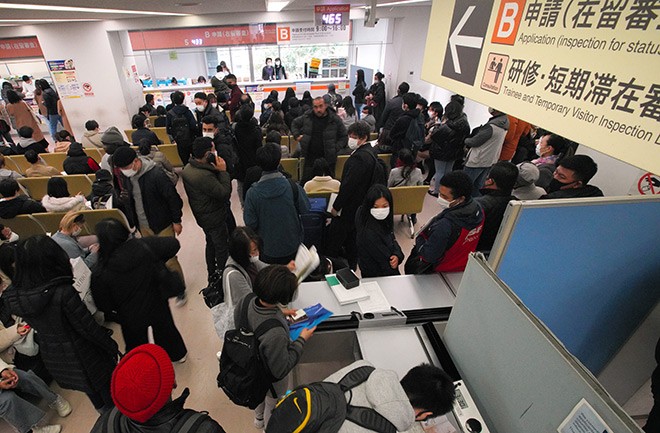 With attention in Japan focused on the public at large trying to protect themselves from the new coronavirus pandemic, one group of people has largely fallen through the safety net: foreign technical intern trainees who are going it alone after fleeing from companies with draconian working conditions.

Some have turned themselves in at immigration offices in the hope of returning to their homelands, but all sorts of obstacles prevent them from leaving Japan.

Because they have violated the visa on which they entered Japan, the "missing" technical intern trainees are no longer covered by the Japanese health insurance system, meaning they cannot seek treatment at a medical institution should they become infected with the coronavirus.

A 29-year-old Vietnamese, who came to Japan as a technical intern trainee only to quit his job, said, “I am afraid of the coronavirus and I want to return as soon as possible to Vietnam since I have no work.”

The man, who only wanted his family name of Be used, arrived in Japan six years ago to learn skills in the construction industry. He took out loans totaling 1.1 million yen ($10,200) to come to Japan, and had assumed he would be able to pay the money back from his earnings.

His work involved tearing down buildings in Fukushima Prefecture, but he only received a paltry 90,000 yen or so a month.

Be fled the work site because he realized he could never repay the loan. He found jobs as a welder, making noodles and working in a supermarket.

But work became harder to come by from this year as the coronavirus started to spread.

In late February Be decided he had enough and it was time to return home, so he turned himself in to the Immigration Services Agency. He reserved a plane ticket, but could not return to Vietnam because the flight was canceled.

On March 22, Vietnam denied entry to all foreign nationals. By March 25, Vietnam Airlines had suspended all its international flights.

Be has a number of friends who are in a similar situation of not being able to return to Vietnam even though they turned themselves in to the authorities.

Nisshinkutsu, a Buddhist temple in Tokyo, has long championed the cause of Vietnamese in Japan by providing support.

“There are those who cannot return home even after they turned themselves in. They have no place to live and nothing to eat,” said Rie Yoshimizu, 50, who is among the temple's staff.

The Saitama Prefecture-based association of Vietnamese living in Japan has received a number of calls about the coronavirus as well as about how to return to Vietnam.

One missing technical intern trainee said, “If I am to die, I want to die in Vietnam.”

According to the Immigration Services Agency, about double the normal number of overstayers turned themselves in between late February and March.

Junpei Yamamura, 65, a Yokohama-based doctor who provides free medical consultations to the immigrant and refugee communities in Japan, said: “If people are unable to obtain medical care because they are overstayers, their infections might be overlooked. They could become new sources of infection and the problem would rebound back to society as a whole.”

Technical intern trainees who have fled their job sites typically avoid going to hospitals, even when they are not feeling well, because they fear being turned in to immigration officials.

With illnesses not being treated in such cases, there is always the twin possibility of disease spreading widely in society and soaring medical fees when the symptoms become more serious.

Conversely, if the symptoms are detected and treated early, the economic burden on society could be reduced.

For that to happen, Yamamura said a system needs to be in place whereby the authorities are not notified when overstayers seek medical tests or treatment.

In Japan, like elsewhere, it is the weakest members of society who are most vulnerable to illness.

According to Andrew Cuomo, the New York governor, coronavirus fatalities in New York city have been comparatively more common among Hispanics and African-Americans.

Among Caucasian Americans, who are likely to be more affluent, they only account for 27 percent of the coronavirus deaths even though their ratio of the city population is 32 percent.