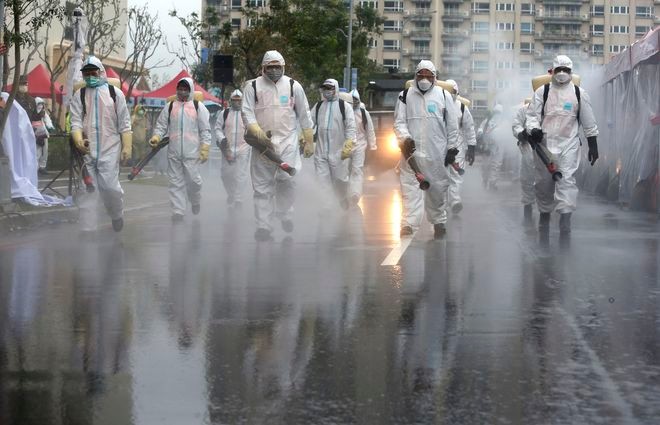 TAIPEI--Taiwan reported 22 new coronavirus cases on Sunday, almost all of them sailors who had been on a friendly visit of Taiwanese navy ships to the small Pacific island state of Palau last month.

Taiwan has to date been relatively successful at controlling the coronavirus due to early prevention and detection, and last week celebrated three days in which no new cases were reported.

But on Saturday Taiwan said that three cadets who had been part of the mission to Palau, one of only 15 countries to maintain formal diplomatic ties with Taiwan, had been infected, and that 700 sailors were being quarantined and tested.

The 21 sailors whose positive tests the government announced on Sunday bring the total cases in the navy to 24.

Speaking at a news conference, Taiwan Health Minister Chen Shih-chung said the cases had so far only been discovered on one of the three ships that had visited Palau, but that further investigations were needed before they could say where exactly the sailors had contracted the virus.

Mei Chia-shu, deputy commander of Taiwan's navy, gave a deep bow in an expression of apology at the same news conference for the infections and not properly carrying out prevention measures.

"We will exert all efforts to look after our infected personnel and care for their family members," he said.

The sailors had all disembarked on Wednesday upon arriving back in Taiwan. The ships had docked at Palau from March 12-15.

Palau President Tommy Remengesau told Reuters in an interview on Wednesday that his country of 20,000 people had not had a single case of the coronavirus and that he was going to close borders to keep the virus out.

Palau has received help from Taiwan to fight the virus, including testing suspected cases and receiving face masks from Taiwan.

Taiwan's presidential office said on Saturday that President Tsai Ing-wen had been at the ceremony to welcome back the ships but had only waved to the sailors from the shore and had not been exposed to the risk of infection.

These are the first coronavirus cases reported in Taiwan's military.

The new cases bring Taiwan's total to 420, six of whom have died.