Eto, Takaichi opting out of Yasukuni visits during outbreak 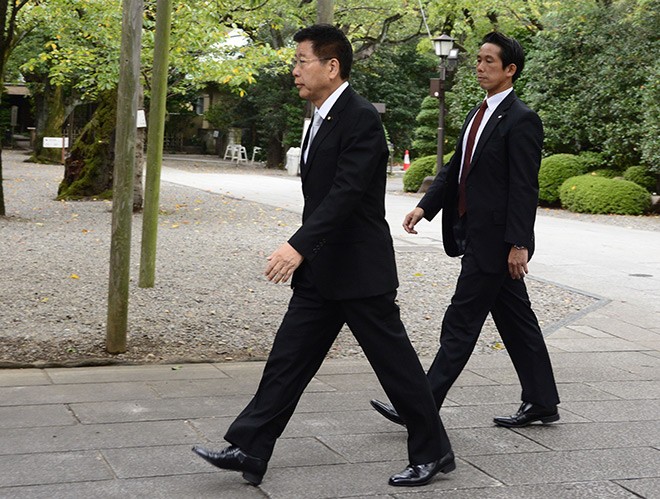 Cabinet members are canceling their visits to war-related Yasukuni Shrine due to the new coronavirus outbreak, although the facility, seen as a symbol of Japanese militarism overseas, intends to hold its spring festival.

Seiichi Eto, minister in charge of Okinawa and Northern Territories affairs, told The Asahi Shimbun on April 19 that he will not visit the shrine in Tokyo’s Chiyoda Ward during its April 21-22 festival.

He said it will be the first time he will not attend the event since he became a Diet member in 1990.

“I had planned to pay a visit to the shrine during the early hours when the crowd is supposed to be small, but I decided not to go after all at a time when Prime Minister Shinzo Abe is calling on the public to stay at home,” Eto said.

He said he had never missed the shrine’s important events, such as spring and autumn festivals as well as Aug. 15, the anniversary of the end of World War II in Japan.

Another regular visitor to the shrine, Sanae Takaichi, minister of internal affairs and communications, has also expressed her intention to opt out of a pilgrimage to Yasukuni during the spring festival.

Eto and Takaichi were the two Cabinet members who visited the shrine during its autumn festival in October.

Visits by prominent Japanese politicians to the shrine inevitably stir anger in overseas countries, particularly China and South Korea. They regard the shrine as a symbol of Japan’s past militarism because 14 Class-A war criminals from World War II are memorialized alongside Japan’s war dead there.