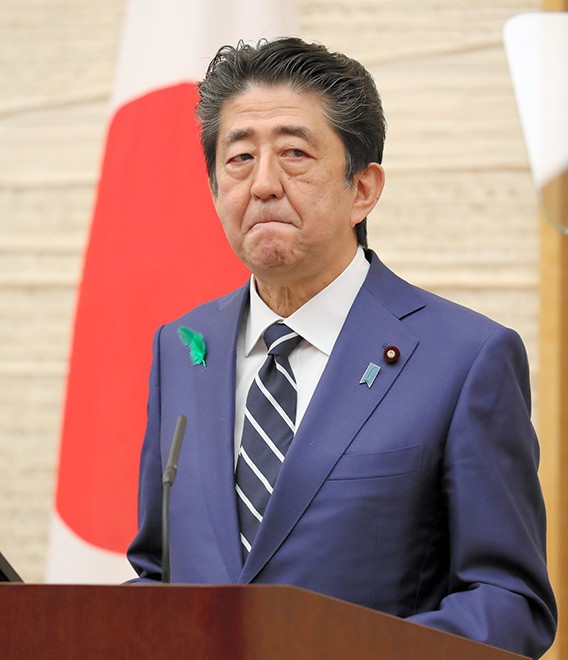 Nearly 90 percent of survey respondents support the expansion of the state of emergency to cover all of Japan announced by Prime Minister Shinzo Abe on April 17. (Takeshi Iwashita)

More than half of voters believe Prime Minister Shinzo Abe has failed to show leadership in Japan’s efforts to stem the spread of the new coronavirus, according to an Asahi Shimbun survey.

The nationwide survey, conducted on April 18-19, showed that 57 percent feel that Abe has lacked leadership during the health crisis, compared with 33 percent who believe otherwise.

In addition, 53 percent do not approve of the government’s response so far to the novel coronavirus, up from 41 percent in the previous Asahi survey conducted on March 14-15.

Thirty-three percent in the latest poll approve of the government’s actions, down from 41 percent.

Some 77 percent of respondents believe that Abe’s April 7 declaration of a state of emergency for Tokyo and six prefectures came “too late,” while 18 percent view the timing as “appropriate.”

The survey also showed that 88 percent favor the expansion of the state of emergency to cover all of Japan on April 16. Nine percent do not.

One of Abe’s measures to prevent the spread of the virus is the delivery of two cloth face masks to all households in the country. Sixty-three percent of respondents disapprove of the measure, while 32 percent approve of the plan.

Half of the respondents who support Abe’s Liberal Democratic Party disagree with the two-mask measure. The figure climbed to 68 percent among those who identify themselves as unaffiliated.

However, a combined 77 percent favor the blanket cash handout of 100,000 yen ($925) per person as a relief measure. Of them, 18 percent “strongly” support the step while the remaining 59 percent “somewhat” back the measure.

Among the 23 percent who do not support the cash payment measure, 18 percent were “somewhat” against the plan and 5 percent were totally against it.

As for other relief measures, 82 percent of respondents said the government should provide compensation to stores and businesses that suffer losses as a result of complying with authorities’ requests to shut down during the state of emergency. Ten percent answered otherwise.

In response to government calls to stay at home following the state of emergency declaration, 76 percent of those surveyed said they have started to refrain from going out. But 24 percent said they have not changed their lifestyles.

The percentage of respondents who said they are going out significantly less than before is high among young people, the survey showed.

By region, 80 percent who live in Tokyo and the six prefectures that initially came under the state of emergency said they are refraining from going out.

For the remaining prefectures, the ratio was 72 percent.

The support rate for the Abe Cabinet stood at 41 percent, the same as in the previous survey in March, while the disapproval rate moved up to 41 percent from 38 percent.

The survey also asked if the government should reopen the investigation into the Moritomo Gakuen scandal, in which the educational institution linked to Abe’s wife, Akie, received a steep discount for the purchase of state-owned land in Osaka Prefecture.

A Finance Ministry employee in Osaka who committed suicide said in notes released recently that he was forced to falsify documents related to the land deal at the order of a ranking ministry official.

Seventy-two percent of respondents in the survey backed calls to reopen the investigation, while 17 percent said it is not necessary.

For the latest survey, respondents were contacted through home phone or mobile numbers selected at random by a computer.