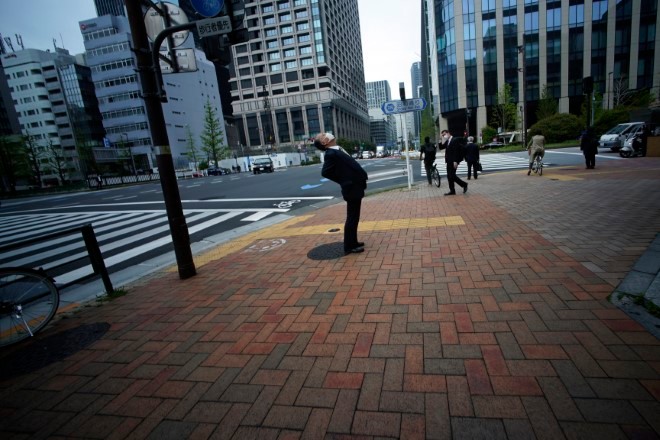 A man wearing a mask against the spread of the new coronavirus stretches at a business district in Tokyo on April 21. (AP Photo)

Prime Minister Shinzo Abe said people haven’t practiced social distancing as much as they should under the state of emergency he declared two weeks ago to fight the coronavirus.

Abe has asked people reduce social interactions by as much as 80 percent to slow infections to manageable levels, but surveys show people are moving around too much, especially at train stations and in downtown areas where restaurants and grocery stores are still operating.

Abe said Tuesday that hospitals are already overburdened and that infections must be slowed.

“I seek further cooperation from all of you,” he said.

Abe noted that many people in urban areas made out-of-town trips over the weekend, possibly spreading the virus and putting elderly people at risk.

Abe has been criticized as being too slow and lax in his handling of the virus.

Last week he expanded his state of emergency, which was initially limited to Tokyo and six other urban areas, to all of Japan to prevent people from traveling out of town as the nation approaches its extended “golden week” holidays later this month.

His government was also seen as reluctant to request non-essential business closures due to fears of the economic impact. Only Tokyo and several other prefectures have made business closure requests, which carry no penalties.

The number of cases in Japan has topped 11,000, and Tokyo is reporting more than 100 cases daily.

In addition, a crew member on the Italian-operated cruise ship Costa Atlantica, docked in Nagasaki in southern Japan, has tested positive for the virus after developing cough and fever. The ship has been docked since late January for repairs and maintenance and no passengers are aboard. It has 623 crew members, who have not left the ship since mid-March. Three others also tested Monday were not infected, officials said.