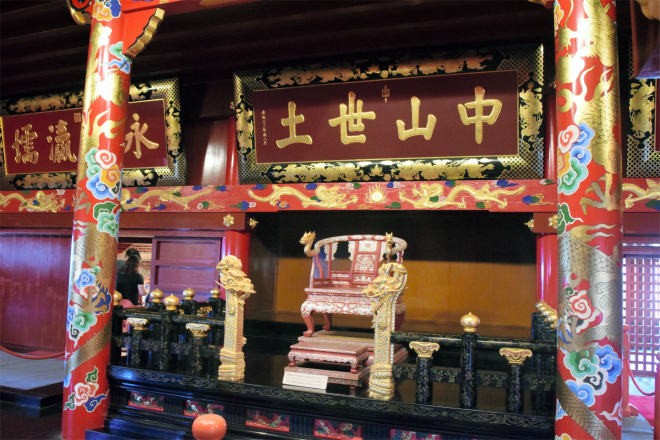 Replicas of a framed motto and a throne exhibited at the Seiden main hall of the Shuri Castle before they were lost in the Oct. 31, 2019, blaze. This photo was taken in 2017. (Asahi Shimbun file photo)

Koin Maeda, the most celebrated traditional lacquer artist of Okinawa Prefecture, who died on Jan. 14 at age 83, was in the habit of saying, "The Dragon of Ryukyu is a gentle soul."

He often explained that the mythical creature perfectly embodied the peace-loving heart of Okinawans who do not believe in confrontation.

According to his widow Sakae, 75, Maeda's marriage proposal to her was: "Let's build Shuri Castle together."

For almost 30 years, the couple poured their hearts into restoring the castle, the soul of Okinawa.

Commissioned to choose the color scheme for the entire Seiden (Main Hall), Maeda visited the Forbidden City in Beijing for inspiration, and came up with his original design that included an ascending dragon and clouds of five colors.

His work continued beyond 1992, the year the Seiden was fully restored.

The king's throne was painted with scarlet lacquer and decorated with a golden dragon with round eyes and a kindly face. Maeda created an inlay design with 2,000 fragments of great green turban shells, using a sewing needle to set them in place.

On Oct. 31, 2019, a raging fire consumed Shuri Castle. The Seiden was destroyed.

For the Maedas, the castle was like their beloved child. But it all disappeared in a single night.

The following morning, the husband and wife renewed their vow to restore the castle together and, once again, they set to work.

But their collaboration ended abruptly in mid-January when Koin died of a heart attack.

On April 30, it will be exactly six months since the Shuri Castle blaze.

Because of the COVID-19 crisis, I was initially hesitant to go to Okinawa to report on the castle. But when Sakae asked me to see the castle with my own eyes, my mind was made up. I visited her in Shuri.

Expecting restoration work to be in full swing, I was pained to see burn marks on the castle gate. And amid the din of excavators tearing down structures in need of demolishing, I was acutely reminded that the scars from the fiery tragedy have not healed at all.

"I won't let the coronavirus defeat me," declared Sakae. "I must get moving. First, it'll be the throne."

There was no missing her firm resolve to carry on her late husband's work.

According to the government's plan, the restoration is not expected to be completed for another six years.

But from the castle's observation tower, I could not help but offer a desperate prayer to the gentle dragon to come back as soon as it can.