Mask shipments to pregnant women halted due to defects 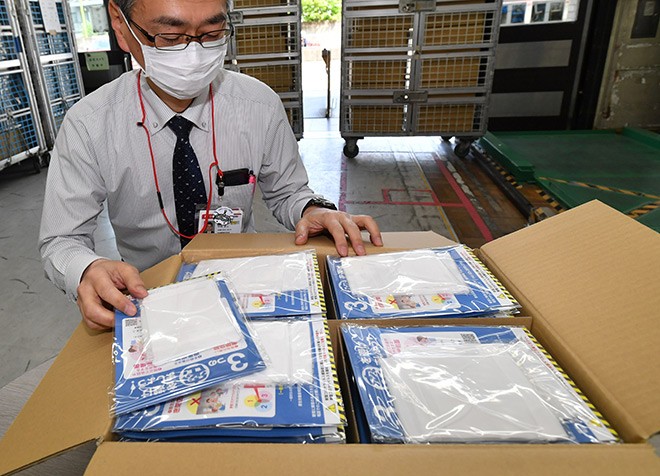 The government is suspending distribution of cloth face masks to pregnant women, following reports that more than 7,800 were defective, including some that have been stained or contaminated.

It is also suspending the delivery of cloth masks to elementary, junior high and senior high schools, as well as special-assistant schools, after small insects were found in one mask.

The Ministry of Health, Labor and Welfare said defects were also identified in the cloth masks that started being mailed to all households on April 17.

The ministry said it is looking into the matter.

On April 14, the ministry began sending municipalities across the country some 500,000 cloth masks for expectant mothers, as part of the government’s measures to address a mask shortage and to prevent a further spread of the novel coronavirus.

Within days, the ministry got an earful from local governments about thousands of faulty masks.

The problems include contamination with human hairs and other foreign objects, as well as stains and discolorations.

The ministry said it believes many municipalities have not yet delivered the masks to pregnant women because they identified the defects immediately.

The distribution of two cloth masks to each household began on April 17.

As of April 20, only residents in Tokyo, which has the highest number of confirmed cases in the country, started receiving the masks.

The ministry said all of the masks it is distributing were manufactured at domestic companies’ overseas factories.