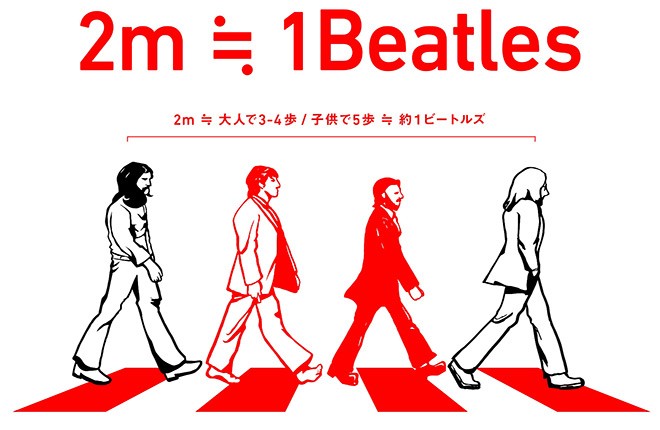 Let’s stay one Beatles apart. (From the Pandaid website)

Animals, household items and even the Beatles’ Abbey Road album are being used to inform people about how close they can safely come together in this age of social distancing.

Health experts recommend that people always stay at least 2 meters apart outside of their homes to minimize the risk of infection from the novel coronavirus.

But for those with trouble visualizing that distance, some groups have come up with practical and humorous guides.

Staff at Tokyo Zoo Net, an organization that manages the official websites of zoos and aquariums run by Tokyo metropolitan government, have tweeted graphics showing the 2-meter length equals “a shoebill bird with wings spread” or “three Shiba Inu dogs.”

Replies to the popular tweets say the comparisons are “easy-to-grasp” and “useful.”

Tokyo Zoo Net staff then offered other measurement tips, such as “three to four giant hawkfish” or “three Tasmanian Devils.”

Pandaid, a website that provides information and tips on surviving the COVID-19 pandemic, has made several illustrative PDFs available for download on how to measure the safe distance.

One of them is titled, “Let’s stay one Beatles apart,” featuring the front cover of the British band’s Abbey Road.

The cover shows John Lennon, Ringo Starr, Paul McCartney and George Harrison walking on a London zebra crossing. The Pandaid graphic notes that the distance from Lennon to Harrison is about 2 meters.

In the United States, where experts have advised people to stay 6 feet apart from each other, “two Golden Retrievers standing nose to tail” and “a moose’s antlers” have been used as a measurement tip, according to a CNN report.

Tadahiko Shirota, an associate professor at Toin University of Yokohama who specializes in mathematics education, said humans started the practice of measuring with universal units, such as meters, for “recording and reporting” purposes.

But measuring using body parts has remained unchanged and useful for thousands of years. Extending both arms, in particular, is a popular and universal way to measure length.

Shirota said people should use such a method for proper social distancing.

“When two people can spread both of their arms without touching each other, you can say it’s a bit safe,” he said.

Shirota said people can also use things in their homes to figure out what the 2-meter distance looks like. A tatami mat, for example, is about 1.8 meters long.

“It would be fun to find various tools,” he said.

TO SIT OR NOT TO SIT

But constant social distancing can lead to confusion and exhaustion.

A 33-year-old woman in Tokyo said she recently had to make an agonizing decision when she was on a subway train.

She thought she lucked out when she saw empty seats on the train. But she then realized that the seated passengers were keeping an empty seat between them.

“I was exhausted from work and wanted to rest my weary feet,” she said. “I would find it a lucky break in ordinary circumstances, but now, I hesitate and wonder if it’s OK to take a seat.”

In confined spaces, such as small supermarkets, it is nearly impossible for customers to stand 2 meters apart in front of a cash register.

A team of researchers at the Harvard School of Public Health recently said people in the United States may have to continue practicing social distancing and refrain from going out until 2022 to contain the spread of the virus.

“Keeping a distance from others is a new thing for us. Until now, ‘move up and stand or sit closer to people next to you’ was the rule,” he explained.

Each individual has a different definition of comfortable social distance. But the pandemic has suddenly set a blanket distance.