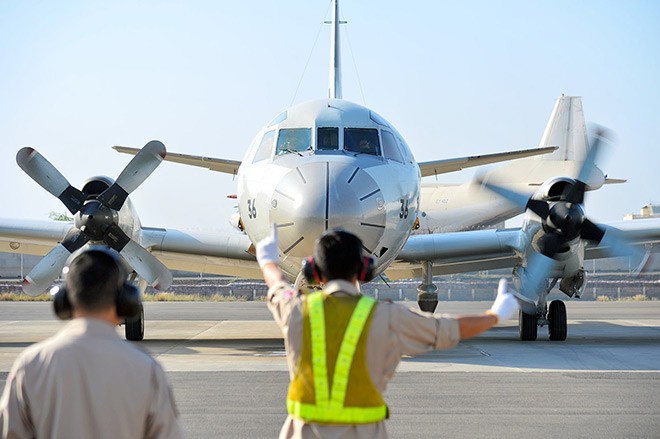 A P-3C patrol aircraft starts an engine to take off in Djibouti on Jan. 21. (Provided by the Defense Ministry)

The Defense Ministry is giving up on an upcoming personnel rotation for a unit on an anti-piracy mission in waters off Somalia due to the coronavirus pandemic.

But it will replace the unit’s two P-3C patrol aircraft, which are due for inspection next month, while pursuing a diplomatic solution so it can extract the 60 or so personnel marooned there.

Defense Minister Taro Kono announced at a news conference after the Cabinet met on April 21 that the Maritime Self-Defense Force members currently part of the unit will continue their mission for the time being.

“There will be no particular impact on the operation,” Kono said, but he added that the current situation “cannot continue indefinitely.”

Government sources said the operation “cannot be suspended,” given that it has successfully reduced piracy off the coast of Somalia.

At this point, Kono said he is not considering a temporary withdrawal of the unit.

The unit, comprising two P-3C patrol aircraft and about 60 MSDF members, was deployed in January to a temporary SDF base in Djibouti as part of an international effort to combat piracy off East Africa. The unit is also tasked with gathering intelligence in waters in the Middle East.

Aircraft and MSDF members are usually replaced together every three months. A replacement unit was initially scheduled to arrive by the end of April, but the ministry was unable to arrange the personnel rotation because the government of Djibouti has restricted the entry of foreign nationals due to the virus spreading there.

Since the members cannot leave the base and dine freely while the outbreak rages, Kono expressed his intention to keep negotiating with the government of Djibouti to find a way to relieve them.

The destroyer Oonami, which has a crew of about 190, will leave Japan on April 26 to replace a unit dispatched to waters in the Middle East for a separate anti-piracy operation.

As a precaution against infections, those crew members will not disembark, even when the destroyer calls at port to replenish fuel and food.