EDITORIAL: Abe government still trampling on what the people of Okinawa want 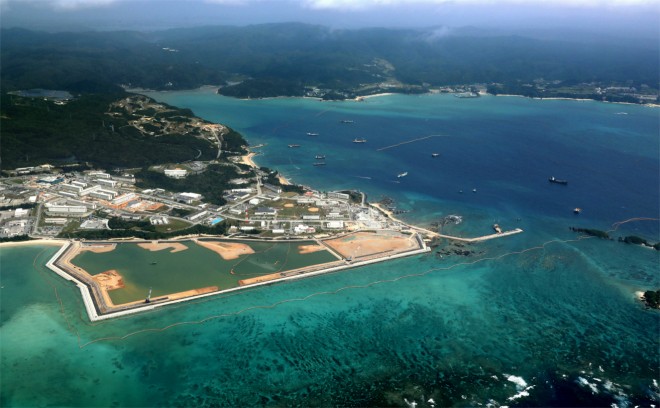 Landfill work is under way off the Henoko district of Nago, Okinawa Prefecture, on March 26 to build a new U.S. base to relocate the U.S. Marine Corps Air Station Futenma in Ginowan, also in the prefecture. (Asahi Shimbun file photo)

What does the Abe administration think it is doing to Okinawa and the people who live there?

On April 21, the government submitted a formal request for the Okinawa prefectural government to permit a change in the design of the reclamation work to build a new U.S. military base off Henoko, a district in the city of Nago in the prefecture.

It was the day after the local government declared a state of emergency on its own as the number of confirmed cases of infection with the new coronavirus had surged.

In an April 17 news conference, Prime Minister Shinzo Abe said, "To overcome the battle against the virus, a sense of unity between the government and the people is more important than anything else."

But what the Abe administration is doing in Okinawa is only deepening the division and confrontation between the central government and the prefecture. Its outrageous action has imposed unnecessary burdens and pressure on the local government, which needs to devote itself to efforts to protect the health and lives of the people in the prefecture.

It is totally fair for Okinawa Governor Denny Tamaki to denounce the government's move, saying it shows "a total lack of understanding of the current situation" in the prefecture.

The change in the design has been forced by the discovery of extremely soft ground under the seabed in parts of the area where the reclamation work is under way to build a facility to take over the functions of U.S. Marine Corps Air Station Futenma in Ginowan, also in the prefecture.

When geological surveys that ended in 2016 discovered a vast expanse of soft ground, the administration did not publish the discovery and acknowledged the fact only after it started dumping earth and sand into the reclamation area in December 2018.

In filing the new request, the government refused to pay serious attention to calls for a fresh survey to learn more about the condition of the ground. Citing discussions on the issue at an expert panel under control of the Defense Ministry, the administration is poised to forge ahead with the new plan.

Even more surprising is the government's argument that no new environmental impact assessment is necessary even though the new plan calls for driving more than 70,000 piles into the seafloor at a depth of 70 meters to deal with the soft ground.

With regard to this issue, too, the government claims its decision is based on opinions of independent experts and that the environmental impact will be about equal to or less than the current estimate.

In its ruling on a lawsuit filed by local residents in Henoko to stop the reclamation work, the Naha District Court said that a new environmental impact assessment should be done. This is a reasonable view about the issue although it does not concern the main bone of contention.

As we have repeatedly pointed out, it is already obvious that the plan to build a Futenma replacement facility in Henoko is already bankrupt.

In addition to a series of votes in which local voters made their opposition to the base plan clear, the construction will take 12 more years to complete, far longer than originally expected. That means there will be no early return of the Futenma base site, the project's purpose.

Moreover, the cost will balloon to some 930 billion yen ($8.63 billion), about 170 percent above the original estimate. Even more money will be required to deal with future land subsidence.

This will happen when the government, already in a fiscal crunch, will have to finance gargantuan spending to mitigate the effects of the coronavirus pandemic.

Both politicians and bureaucrats, however, only repeat the familiar refrain. Henoko is the only solution to eliminating the danger posed by the Futenma air base, which is located in the middle of a densely populated area. They show no ability to think reasonably about this matter.

A prefectural assembly election is scheduled for June. It is said that the administration decided to submit the request for the design change in April to minimize the political impact on the election by securing as long a "cooling-off  period" as possible.

If so, this is another clear sign of the administration's self-centered approach to the issue, which has run roughshod over the people of Okinawa.

Let us ask again what Okinawa means to the Abe administration.