Hiroshima chief drops plan to use cash handouts after outrage 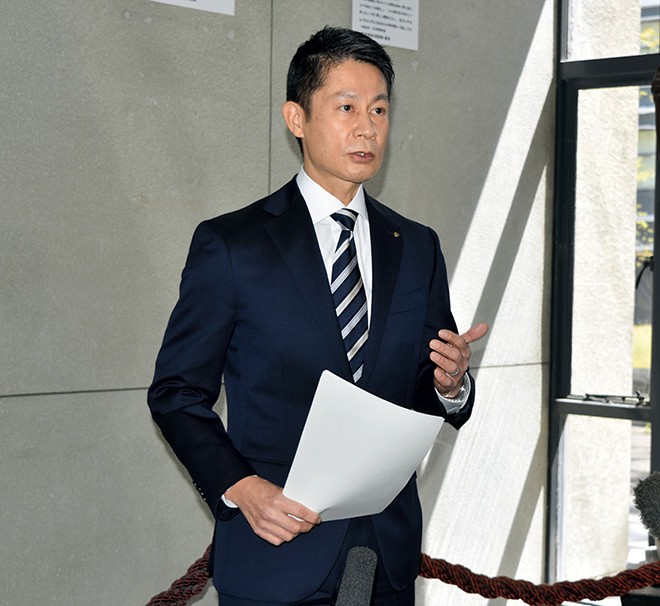 Hiroshima Governor Hidehiko Yuzaki floats the idea of “utilizing” cash handouts from the central government to help local companies in the fight against the new coronavirus. (Hiroki Kitamura)

HIROSHIMA--Hiroshima Governor Hidehiko Yuzaki backpedaled on his much-maligned suggestion of diverting coronavirus-relief funds for prefectural employees into a rescue package for local companies.

“It was inappropriate to say ‘utilizing,’” Yuzaki told reporters on April 22, referring to the central government’s planned cash handouts of 100,000 yen ($925) for each resident of Japan to help weather the health crisis. “It is money the prefectural employees are entitled to receive.”

The previous day, Yuzaki floated the idea of using the handouts given to prefectural employees to fund the prefecture’s planned relief package for small and midsize companies. Under the plan, the companies would receive up to 500,000 yen each if they reduce operation hours to help stem the proliferation of the virus.

“I will consider all options, including utilizing the 100,000-yen handouts” to prefectural employees, he said.

His remark triggered an outcry from labor union-related officials who called it “heavy-handed.” The idea was also widely criticized on social media.

One of the many critics was Takashi Nakamoto, chairman of the prefectural assembly. He said he sent a direct protest to the governor over his comment.

In backing down, Yuzaki acknowledged the need to consult the assembly and the association of prefectural employees over how to raise funds for the emergency package and anti-coronavirus measures.

He also said he will take a pay cut to help finance the relief package.

A total of 25,571 people were employed by the prefecture as of last April, according to the Hiroshima prefectural government. They included prefectural police officers and staff at prefectural hospitals.

(This article was written by Hiroki Kitamura and Tomoyo Hatta.)