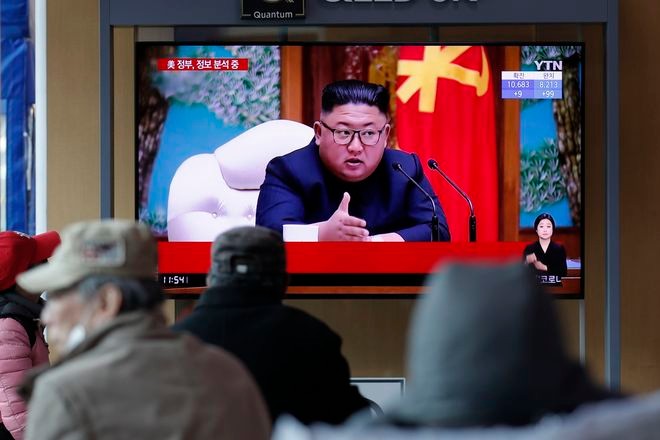 People watch a screen showing a program reporting about North Korean leader Kim Jong Un with a file image at the Seoul Railway Station in Seoul on April 21. (AP Photo)

A recent CNN report triggered a flurry of speculation over the health of North Korean leader Kim Jong Un, saying that he had some sort of surgery or that he is gravely ill.

All this started when Kim missed the April 15th birthday celebration of his late grandfather, Kim Il Sung.

The current commotion feels like a throwback to the time before the death of his father, Kim Jong Il.

After the latter failed to show up at a ceremony to mark the country’s national foundation day, questions about his health erupted.

"Until he appeared before the public one day in dark glasses, all sorts of rumors flew around--even within the Kim administration," former Pyongyang diplomat Thae Yong Ho recalled in a book published after he defected from North Korea.

When Kim died in December 2011, the announcement of his death was withheld for 51 hours at his son's orders, according to Thae.

"Only in North Korea is it possible to keep the supreme leader's death under wraps for two days," Thae noted. "The same may well happen when Kim Jong Un becomes ill."

Back in 1986, the South Korean media reported that Kim Il Sung had died in a coup d'etat, fatally shot by a senior officer of the North Korean Army.

The source of this shocking news, which turned out to be false, was said to have been a U.S. intelligence officer who misunderstood an intercepted Pyongyang Broadcasting Station report.

And now, what is really going on?

According to a colleague of mine stationed in Seoul, the Blue House denies rumors of Kim Jong Un's health crisis, noting the South Korean government is "not aware of any irregular developments (in Pyongyang)."

However, my colleague also told me the prevalent view in South Korea now is that Kim very likely had some kind of cardiac surgery.

A quality South Korean daily pointed out that Kim, who is in his 30s, is obese, hypertensive and a heavy smoker--all "inherited" from his father and grandfather.

Even though North Korea is the "most watched" nation in the world, the questionable health of its supreme leader remains a jealously guarded state secret, so to speak.

The shroud of secrecy that has enveloped this reclusive dictatorship for three generations is still as thick as a wall.