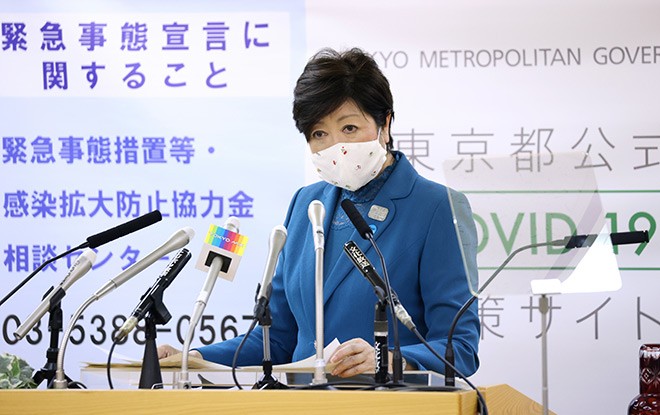 Tokyo Governor Yuriko Koike on April 23 urged residents not to go grocery shopping more than once every three days to cut the risk of the spread of the new coronavirus.

“Please limit your grocery shopping to around once in three days," Koike requested during a news conference. “But do not panic-buy, please. We have a sufficient food supply.”

Financial and busy entertainment districts in the central part of the capital have seen dramatic drops in foot traffic since Japan declared its initial state of emergency covering Tokyo and six prefectures on April 7.

But the governor is alarmed over a sudden increase in shoppers at Tokyo's neighborhood grocery stores, particularly supermarkets.

The governor proposed several other ideas to reduce congestion in stores selling groceries. One was to set up shopping hours exclusively for the elderly, people with disabilities and pregnant women, a norm in major cities in other countries where the pandemic has hit hard.

She also floated expanding spaces in stores for bagging items, prepackaging prepared foods and other items instead of having shoppers pack them and suspending weekly or hourly sales on items.

The central government the same day also requested governors to ask operators of supermarkets and other businesses to take steps to prevent congestion.

But Koike went further, announcing that the metropolitan government will financially reward neighborhood shopping district promotion associations when all members agree to close voluntarily from April 25 to May 6.

The metropolitan government will also subsidize merchants’ efforts to make banners urging customers not to cause congestion.

Koike’s announcement was well-received by many supermarket operators.

The National Supermarket Association of Japan issued a statement shortly after, saying that the governor’s guidelines will “help reduce congestion in supermarkets in Tokyo to a significant extent.”

The association had feared the metropolitan government would take a much tougher approach and request all stores to limit the number of customers inside, which would increase the burden on already exhausted employees and shop staff.

Some Tokyo supermarkets have already limited the number of customers entering their stores.

But the Japan Chain Stores Association, a group of major supermarkets, has opposed the idea of universal regulations.

“Each store has different circumstances, such as size and location, among other things,” an association representative said. “It is important for each store to be creative and ask customers to cooperate.”