Tainted soil dug up at U.S. base, but not handed to Japan officials 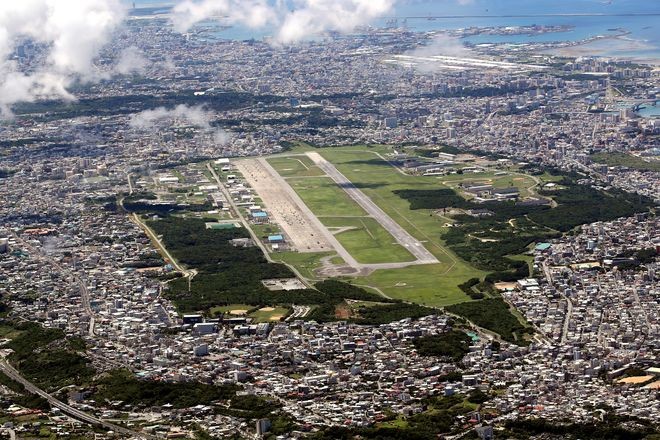 Firefighting foam containing Perfluorooctane Sulfonate (PFOS) leaked from equipment stored at the U.S. Marine Corps Air Station Futenma in Ginowan, Okinawa Prefecture, earlier in April. Japan has banned the production, importation and use of PFOS since 2010.

Officials of the Okinawa prefectural and Ginowan municipal governments had asked for soil samples from around the leakage area so they could conduct independent tests, but the U.S. military removed the dirt without handing over any samples.

According to Defense Ministry sources, U.S. military officials notified Japanese officials on April 23 that soil believed to be contaminated would be dug up and replaced.

Japanese officials observed the removal under provisions of an environmental supplementary agreement to the Japan-U.S. Status of Forces Agreement.

According to Okinawa prefectural government officials, the soil was removed from an area around an equipment storage shed near the southern edge of the Futenma runway. The area is believed to be where the firefighting foam leaked. Soil was dug up from an area of about 65 square meters and a depth of about 15 centimeters.

U.S. military personnel used heavy machinery to dig up the soil and load into sandbags, which were then placed in boxes and disposed of. Okinawa officials said they were told the disposal would be handled in an appropriate manner.

Officials with central government ministries were permitted a rare opportunity to inspect the site on April 16 and told that while the firefighting foam had been stored at the shed, the door was not locked at the time of the leakage.

“There is the possibility that soil pollution could lead to groundwater pollution, so we will continue to ask that samples be provided,” Futenma said.

However, at an April 24 news conference in Tokyo, Defense Minister Taro Kono indicated he did not think there was any need to analyze the removed soil. He added that talks were continuing with U.S. officials about conducting a soil study at a different part of the Futenma base.

(This article was written by Mika Kuniyoshi, Daizo Teramoto and Hideki Kitami.)