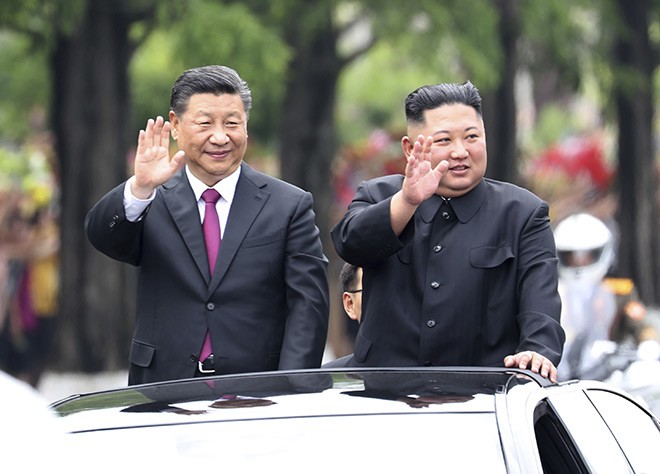 In this photo released by China's Xinhua News Agency, visiting Chinese President Xi Jinping, left, and North Korean leader Kim Jong Un wave from an open-top limousine on June 20, 2019, as they travel along a street in Pyongyang. (Xinhua via AP)

BEIJING--A medical team sent from a prestigious hospital in China to North Korea has raised questions over the reason for the visit, as speculation simmers over the health of leader Kim Jong Un.

The Chinese Communist Party dispatched the team of about 50 experts on or before April 23, but it is unclear if it is related to Kim's health, sources in the party said on April 25.

There has been widespread speculation in recent days that Kim has been suffering from a health-related problem and is in a serious condition.

But Beijing’s move may suggest that the two allies are forming a united front in their response to the new coronavirus pandemic.

The team comprises doctors and other medical professionals working at the People’s Liberation Army General Hospital in Beijing, according to the sources.

Also known as the 301 Hospital, the facility is in charge of the health management and treatment of Communist Party leaders.

The whereabouts of Kim have been unknown since April 11, fueling speculation among foreign media that his health has been deteriorating.

But some experts say that the dispatch is meant to provide broader assistance to North Korea in grappling with the coronavirus rather than a response to Kim’s health, given the size of the team.

On April 23, the Russian ambassador to China sent flowers to the North Korean Embassy in Beijing, which some said was an expression of concerns about Kim’s health.

But North Korea’s Rodong Sinmun, the official newspaper of the Central Committee of the Workers' Party of Korea, denied the speculation, saying the flowers were presented to mark an anniversary of Kim’s visit to Russia.

North Korea has reported no infection with the coronavirus in the country so far, although it has reached pandemic proportions across the world.

But there are unconfirmed reports that the outbreak is spreading in the region close to the Chinese border.

Experts said Beijing sent the medical team to gauge the extent of the deadly contagion in the reclusive country.

After friend’s violent death, artist pours his grief into manga