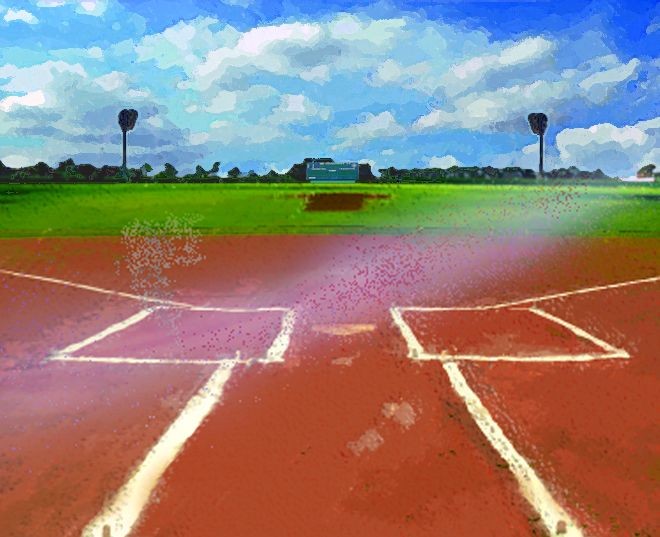 The haikuist has watched baseball games for over 60 years, noting that was how “baby boomers started to learn English before taking classes at junior high.” In Montreal, Quebec, Richard Jodoin cheered for a fictional minor-league baseball player admired by Charlie Brown in the newspaper comic strip “Peanuts.” Thorsten Neuhaus played ball in Munster, Germany, 40 years ago.

talking about
childhood--
a curveball

This year, however, the professional baseball season has been postponed, and for the first time since WWII, Hanshin Koshien Stadium cancelled its all-Japan high school spring tournament due to coronavirus worries. Baseball games for fans Pat Geyer in New Jersey and Roberta Beach Jacobson in Iowa, respectively, were rained out.

spring training ...
virus might rain on the stands
games cancelled

cleaned by
gentle rain
second base

All games in Italy were rained out, reports Rosa Maria Di Salvatore from Catania. As an English teacher in Fukuchiyama, Kyoto, Isaiah Silvers, admitted that he learned the hard way why batsmen wear gloves while batting. Yuji Hayashi peeled wet leaves off a lost toy in Fukuoka.

heavy rain
on the empty seats ...
game over

Strong enough
for the maple bat--
thwack, a yelp and stinging hands

A toy bat
in a red sunset
wrapped in leaves

Bat swings--
Flock of geese
On the ball

Satoru Kanematsu couldn’t sleep while snakes and bears roamed his neighborhood in Aichi Prefecture. Rose Mary Boehm soothed a startled passenger in Lima, Peru. John Hamley watched a barnyard cock strut along the horizon to where the sun was about to rise in Marmora, Ontario.

Waiting
for the frogs
the rooster strides

Ramona Linke hid under the bedsheets in Mansfeld Land, Germany. Daniela Misso hung sheets out to dry from her verandah in San Gemini, Italy.

quarantine
she lays her silence
between the linens

clothes in the sun--
the scent of melting
snow

Reporting from Italy, Luciana Moretto lamented “particularly in Lombardy, people die all alone--no family, no friends, nobody in a hospital room, no funeral, no graveyard, no cremation. Only Socrates’ serene death ... enviable.” From her balcony in Lombardy, Mariangela Canzi spotted a butterfly the size of a golden coin.

Kanematsu lost touch with a haikuist in Syracruse, New York.

Spreading plague--
how is my dear pal
in New York?

Self-isolating haikuists in the cities of Paris and New York can only dream of being outside. Twelve-year-old Bryce Black sketched the most romantic places to be in springtime. New Yorker Jay Friedenberg swayed in the winds as he recalled a holiday.

a spring evening
streetlights
in France

Vandana Parashar settled in for 21 slow-paced days and nights in Panchkula, India.

lockdown
the sky is now the deepest
shade of blue

where were
all these new stars before ...
lockdown

Feeling worried and so lonesome all the time in Inzai, Chiba Prefecture, T.D. Ginting learned the lyrics to the 1963 hit song, “Blue Bayou,” written by Roy Orbison and Joe Melson.

Djurdja Vukelic Rozic resumed a card game with friends in Croatia. Ana Drobot summed up the score for the first quarter of the year in Bucharest, Romania.

spring cleaning
we continue on a rummy score
in old notebook

what we lost
this year ...
hanami

temple in the wind
this, too, is an offering
rafflesia in bloom

Ana Drobot looks forward to seeing a golden moon overhead Bucharest, Romania, on May 7. Near Kristen Lindquist’s home in Camden, Maine, there’s an abundance of golden flowers to give to friends: gorse, primrose, rowan, hawthorn, hazel, and marsh marigold.

Baseball--
a leaf over
the full moon

flower moon
the waxwing shares a petal
with his mate

A Golden Week of reading haiku at home can be enjoyed with http://www.asahi.com/ajw/special/haiku/. The next issues of the Asahi Haikuist Network appear May 15 and 29. Readers are invited to send haiku about rejuvenation, or a green moon, on a postcard to David McMurray at the International University of Kagoshima, Sakanoue 8-34-1, Kagoshima, 891-0197, Japan, or e-mail to mcmurray@fka.att.ne.jp.