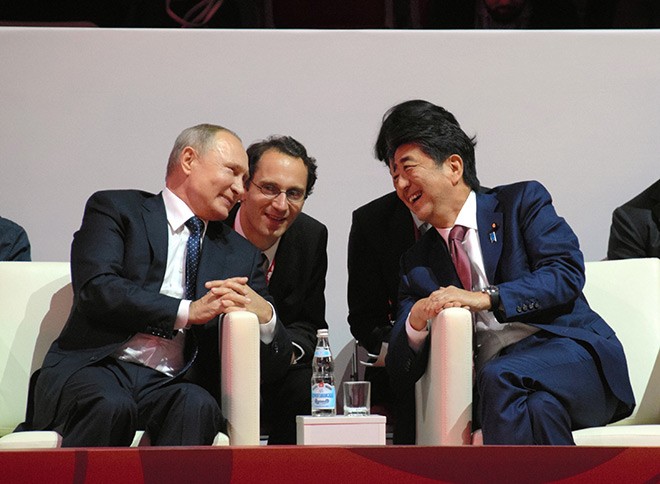 Japan has notified Russia that Prime Minister Shinzo Abe will not attend rescheduled Victory Day celebrations in Moscow if they are held on Sept. 3, the anniversary of that nation’s victory against Japan in World War II, government sources said.

They said the government had already informed Russia through diplomatic channels of Japan's position.

Russia traditionally celebrates Victory Day on May 9, a public holiday, to commemorate Nazi Germany’s surrender to the Soviet Union in 1945.

This year, to mark the 75th anniversary of this historic event, the Russian government has invited world leaders to the celebrations, including Abe.

The Japanese government welcomed the overture, hoping it would offer an opportunity for Abe to again meet with President Vladimir Putin to advance peace treaty talks with Russia over the thorny Northern Territories issue.

But the global new coronavirus pandemic has scotched those plans, and Moscow has now hinted it intends to reschedule the ceremony to Sept. 3, rattling the Japanese government.

Putin on April 24 signed a bill to change the anniversary of the end of World War II from Sept. 2 to Sept. 3.

Vladimir Shamanov, head of the defense affairs committee in the duma, or lower house of parliament, has mooted June 24 as the ideal date to mark the event, noting that the Soviet Union held a parade to celebrate its victory against Germany on that day in 1945.

According to Shamanov, the other option is Sept. 3, which is a more feasible alternative in light of the COVID-19 outbreak sweeping Russia.

But this is a totally unacceptable for the Japanese government as the Soviet Union used to celebrate Sept. 3 to commemorate its victory against militarist Japan in the conflict.

In the post-Soviet era, several attempts were made to revive the tradition. But that did not happen because the Russian government was keen to avoid damaging relations with Japan.

In 2010, the government proclaimed Sept. 2 to be the day World War II ended, but not a public holiday.

To all intents and purposes, changing the anniversary date to Sept. 3 amounts to a revival of Victory Day against Japan.

Moscow’s stance on the Northern Territories that lie off the northern main island of Hokkaido is that they are the legitimate spoils of war and rightfully became Russian domain as a result of the outcome of World War II.

The Russian government maintains a hard-line position in that regard and keeps urging Japan to accept that reality.

By holding the Victory Day event on Sept. 3, Putin and his allies appear to be using it as an opportunity to portray Russia as the victor, thus justifying its claim to the Northern Territories.

The bill that Putin signed was based on a proposal submitted by lawmakers from Sakhalin, which manages the Northern Territories.

“If Russia holds the ceremony on Sept. 3 and invites Abe, he will not go,” an Abe administration official said.

An official of the Foreign Ministry said the prime minister's attendance at such event was “unacceptable because it could lead to justifying Russia’s occupation of the Northern Territories.”

(This article was written by Ryosuke Ishibashi in Moscow, Tatsuya Sato and Yuki Nikaido in Tokyo.)