Amid outbreak, calls grow for September start of school year 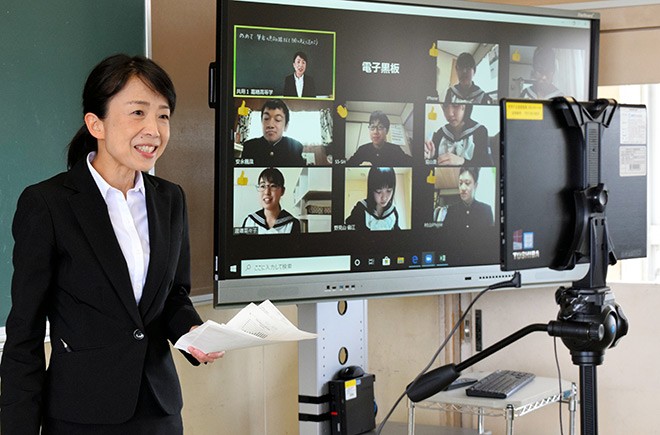 School closures during the novel coronavirus outbreak have reignited calls among students, parents and local government leaders to start the academic year in September to fall in sync with Western nations.

The issue has been raised in the past, with proponents saying the change would make it much easier for Japanese students to study abroad in, for example, Europe and North America.

Now, they are arguing that the change would not only address school-related issues caused by the pandemic, but it could also fix other long-standing problems, such as the schedule for university entrance exams.

The renewed interest in a September start to the school year was fueled in part by an April 1 tweet by a senior high school student in Tokyo. who suggested the switch to protect student lifestyles.

“Even as the start of school keeps being pushed back, the finish line will not change,” said the tweet, which received about 97,000 likes.

The student also said online teaching was inherently unequal because of the vast differences among schools.

“I cannot accept having to take university entrance exams after months of just doing nothing,” the student said.

Other students have set up an online petition drive calling on the government to change the start of the school year.

In one week, about 3,000 signatures were collected, and the petition will be submitted to the education ministry before the end of April.

Parents have also gotten into the act. One group of parents with children attending Tokyo elementary schools set up a petition site on April 22.

The group said growing disparities in education depending on the community and family environment were a clear violation of the constitutional guarantee of equal educational opportunity.

The parents also asked that Japan follow the standard practice in the West to start school years in September.

An elementary school teacher in Fukuoka Prefecture has been talking with colleagues about switching to a September start.

Among the concerns they raised was that the virus-related delay in starting classes would likely drastically shorten the summer vacation and require students to attend classes on Saturdays and even spend as much as seven hours a day at school.

Even with such measures, the late start could lead to the cancellation of school events, such as athletic meets and field trips.

Moreover, the teacher said a September start to the school year would mean that university entrance exams would no longer have to be held in winter when students must worry about catching the flu or how to get to exam sites in snowy weather.

Naoki Ogi, an education expert, is also in favor of a September start. He said the current April start of the school year was a major reason Japanese universities were not globalizing like their Western counterparts and why fewer Japanese students were thinking about studying abroad.

Miyagi Governor Yoshihiro Murai said at his April 27 news conference that the coronavirus outbreak offers the perfect opportunity for students and parents to engage in discussions about changing the school year calendar.

“It would not do if academic differences arose between regions where there are major effects from coronavirus infections and those with only minor effects,” Murai said.

Education minister Koichi Hagiuda said at an April 24 news conference that he was aware of the talk about moving the start of the school year to September. But he said the most pressing issue at the moment was to prevent a further spread of COVID-19.

Some experts cast doubt on the idea, saying about the only advantage would be in helping students who are thinking about studying abroad.

“As it becomes more difficult to ascertain what the future will bring, there is the possibility that the existing disparity among regions and families could further widen,” said Ryoji Matsuoka, an associate professor at Waseda University specializing in the sociology of education. “It will be important to spell out as soon as possible when school will resume and what will happen to next year’s university entrance exams.”

The education ministry on April 27 made clear that any decision on when classes will resume would be left entirely up to local governments.

The state of emergency declared by Prime Minister Shinzo Abe is set to end on May 6, but the education ministry said it would not set a unified standard for resuming classes, given the large differences in the number of infections among prefectures.