In Seoul, the Art World Gets Back to Business 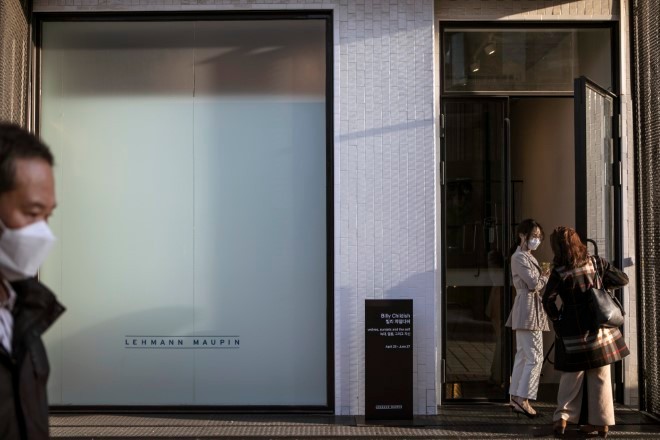 Visitors arrive at the Lehmann Maupin gallery opening in Seoul on April 23, 2020, for the artist Billy Childish. Art galleries remain shuttered around the world but in South Korea, they reopen--with contact tracing and masks. (Woohae Cho/ © 2020 The New York Times)

SEOUL, South Korea--“I wouldn’t say things are totally back to normal,” explained Passion Lim, taking in the scene Thursday at the opening for Billy Childish paintings at the Lehmann Maupin gallery. “But it’s a start,” he added.

Indeed, if you ignored the face masks on about half the attending crowd, it might have been opening night at a blue-chip art gallery anywhere--anywhere before the coronavirus pandemic, that is. Now, as a steady stream of Mercedes sedans pulled up to the valet, disgorging their fashion-forward passengers, South Korea’s return to business as usual seemed almost surreal.

Elsewhere around the world, art galleries and museums remain shuttered, hemorrhaging staff and plaintively asking, What will it take to reopen? And just as crucially, What will this new art world look like? Seoul, a dense metropolis with a population of nearly 10 million but only two coronavirus deaths to date, is offering one possible answer.

Lim had already been to three other gallery openings the previous night in the art-centric Samcheong-dong neighborhood. Having worked from home since February, he was now embracing flexible shelter-in-place guidelines with a vengeance. Social distancing edicts remain in place until May 5, with major museums closed until May 7 and the resumption of school still on hold. But people are starting to refill Seoul’s streets--some skittish, others bounding down the sidewalks.

“It doesn’t make me feel uncomfortable being around people because I trust the government’s response to the virus,” Lim said as he made his way through the crowd of about 50 inside the gallery’s two-story, 3,200-square-foot space. He pointed to South Korean policies that have come to be seen as an international model: government-supplied N95-grade masks for everyone, comprehensive testing, thorough contact tracing of the infected, and immediate isolation of anyone exposed to an infected person.

Here at Lehmann Maupin, a gallery attendant dutifully took down the name, address and phone number of everyone who came through the front door--just in case someone at the opening later found out they had been exposed to the virus. Yet with the daily national infection rate having fallen to single digits, Lim appeared downright blasé about any remaining risks. His mask was pulled down below his chin; others in the crowd offhandedly explained that their masks were in their cars.

Lim was far more concerned that his full name might appear in a newspaper article about wealthy art collectors. Given his China-focused technology business, he was wary of attracting attention from Beijing. (Passion is the first name Lim uses online when chatting about culture.) “Now is actually a good time to see if you can buy art,” he continued, “because collectors around the world having a hard time have put forward quite good art pieces into the market at cheap prices.”

Back in New York City, Lehmann Maupin’s co-founder, Rachel Lehmann, said she was painfully aware of the market dynamic. The gallery’s Hong Kong branch had reopened, but its flagship Manhattan locations had been closed since March 13. With sales there reduced to a crawl, she said she had been forced to institute salary cuts and furloughs among its 36 staffers. Still, having worked as an art dealer for several decades and weathered a string of recessions, she took the long view: This too shall pass.

“It’s what I have seen happening in 2008, and after 9/11, and even earlier, at the end of the ’70s in Europe,” she said. In fact, Asia was already rebounding. Her Seoul branch, which opened in 2017, already accounted for 20 percent to 25 percent of Lehmann Maupin’s total revenue before the pandemic. Now, after an initial pause, many of Seoul’s moneyed collectors have re-entered the fray.

Lehmann noted that Korea-based artists like Lee Bul and Su Se Ok had long been represented by her gallery in New York. But establishing a more public footprint reflected the growing number of Korean contemporary art collectors. The similarly high-powered Pace and Perrotin galleries, based in New York and Paris, had also recently opened Seoul branches--as had the scrappier Los Angeles-based Various Small Fires. All are now competing for Korea’s art dollars with the country’s homegrown galleries.

Accordingly, Lehmann said, she selected Billy Childish for this angst-ridden moment. “The people I’m talking with are looking for something really real, really true, not fabricated,” she explained, describing a newfound hunger for emotionally resonant work which could serve as a “survival kit.”

Childish’s canvases, with forceful brushwork evoking the psychologically loaded landscapes of Vincent van Gogh, and his no less expressive portraiture nodding to Edvard Munch, certainly fit that bill. By Friday afternoon, according to the gallery, four of the seven Childish paintings at the Seoul opening had already sold for approximately $24,000 to $33,000 each, to three buyers in South Korea and one who lives in the United States. (Childish’s record at auction is $56,250 at Christie’s in 2018, according to Artnet.)

No one is more surprised by Childish’s art world trajectory than Childish himself. “It was an overnight success that only took 40 years,” the 60-year-old artist said playfully. Speaking by phone from his home in Rochester, England, he recalled being expelled from London’s prestigious Saint Martins School of Art in 1980 (when he still went by his birth name, Steven Hamper). Insisting on the need for classical figuration over abstraction, decrying conceptualism, and arguing for a working-class-centered radicalism in lieu of the identity politics then entering art theory, he had picked bitter fights with instructors and fellow students alike.

“I was told my attitude, and the way I talked to other artists, and my opinion about art would mean I would never get anywhere in the art world,” he remembered with obvious relish.

Though he never stopped painting, Childish became better known as a singer and guitarist with groups like Thee Headcoats, leading The New York Times to crown him “the reigning world champion of garage rock” in 1998.

Childish also never stopped publicly railing against the gatekeepers of the contemporary art world, whether leading guerrilla-theater-styled protests outside the Tate Modern or crashing (and being physically ejected from) the museum’s Turner Prize celebration. Yet over the past decade he has oddly found himself feted by some of these same figures. “I just got lucky because people I knew 30 years ago came into some sort of position of power,” he said, referring to longtime supporters such as curator Matthew Higgs and Berlin dealer Tim Neuger.

Nonetheless, he’s skeptical it augurs any broader back-to-basics art world shift. The only post-coronavirus change, he mused, might simply be a mass desire to look at artwork without having to sit in front of a screen.

That was certainly the spirit back at the Lehmann Maupin opening. “You have to see the paintings with your own eyes, especially if you are a collector like me,” insisted Soh Ji-hye, 31, who works in marketing. She was echoed by another young visitor, Park Jung-mi, 29, a retail saleswoman, who said she’d been cooped up since January. “But tonight I went out of my way to get out of the house,” she said. “Seeing the paintings directly is so different from seeing them online.”

“Online sales? Not that effective,” said the gallery’s senior director, Son Emma, for whom the virus is increasingly in the rear-view mirror. As the last stragglers left, Son was already thinking ahead to managing new crises. She glanced down at her phone. “The exchange rate is not that bad,” she offered, brightening.