China parliament to start key annual session on May 22 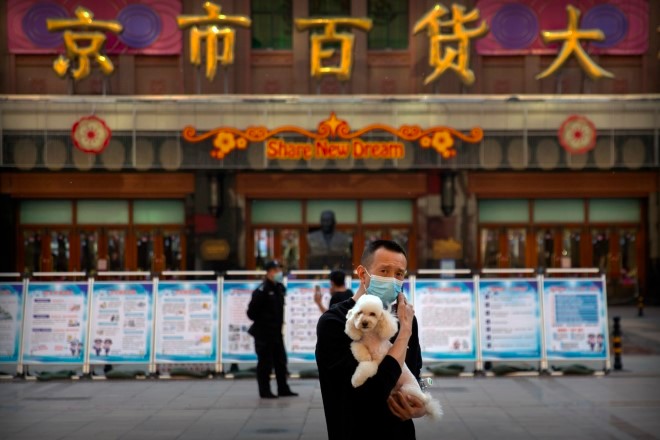 A man wearing a face mask to prevent the spread of the new coronavirus holds a dog as he stands along a pedestrian shopping street in Beijing on April 28. (AP Photo)

BEIJING--China’s parliament will start its key annual session on May 22, more than two months later than originally planned due to the fallout from the coronavirus outbreak, the latest sign that the country is trying to return to business as normal.

The gathering, which will be in Beijing, is when China ratifies major legislation and unveils economic targets. The session was initially scheduled to start on March 5 but was postponed due to COVID-19, which has infected nearly 83,000 people and killed more than 4,600 on the mainland after emerging late last year in the central city of Wuhan.

Conditions for holding the session have been met as the coronavirus epidemic situation has improved in the country and economic and social life gradually returned to normal, the official Xinhua news agency quoted the top decision-making body of the Chinese parliament as saying.

It’s not clear yet how long the two meetings will last. The gatherings traditionally see more than 5,000 delegates descend on Beijing from all over China for at least 10 days, but the capital’s local government has imposed stringent quarantine rules for anyone entering the city from elsewhere and policymakers are wary of a possible resurgence.