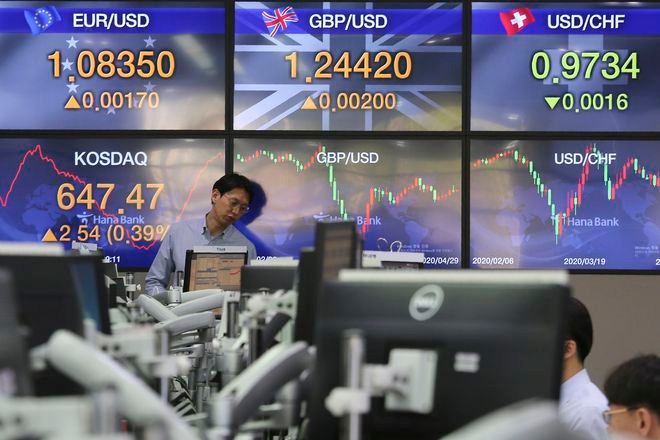 A currency trader watches monitors at the foreign exchange dealing room of the KEB Hana Bank headquarters in Seoul on April 29. (AP Photo)

SYDNEY/NEW YORK--Asian shares rose for a third session on the trot on Wednesday as investors took heart from easing coronavirus lockdowns in some parts of the world while oil prices jumped on hopes demand will pick up.

Risk assets including equities have rallied for most of this month thanks to heavy doses of fiscal and monetary policy stimulus around the globe aimed at softening the economic blow from the COVID-19 pandemic.

Positive news around potential treatments for the infection as well as progress in developing a vaccine have also boosted sentiment recently.

Moreover, investors have regained some confidence as parts of the United States, Europe and Australia are gradually easing restrictions while New Zealand this week allowed some businesses to open.

These factors helped lift MSCI’s broadest index of Asia-Pacific shares outside Japan by 0.9 percent on Wednesday, having rallied 3.3 percent already this week.

Japan’s markets were closed for a public holiday.

Chinese markets opened in the black with the blue-chip index up 0.6 percent.

All the same, analysts were circumspect about the rally.

“The recovery in global share prices from the March lows has not been accompanied by an expansion in market breadth,” said Jefferies analyst Sean Darby.

“Unlike turning points for markets and earnings at the bottom, there is no clear evidence on how the technical picture should evolve. The current rally suggests that conviction levels are low in our view,” Darby added.

The equity gains have come even as analysts predict a sharp contraction in world growth.

Moody’s expects economies of the Group of 20 advanced nations (G-20) to shrink 5.8 percent this year with momentum unlikely to recover to pre-coronavirus levels even in 2021.

Markets were next looking for any guidance from the U.S. Federal Reserve, which is due to issue a policy statement at the close of its two-day meeting on Wednesday. The European Central Bank meets on Thursday.

Analysts said it was unlikely the Fed would make further major policy moves, given the scope and depth of its efforts to counter the economic damage caused by the coronavirus.

Investors are now watching out for the other major tech firms--Facebook, Amazon and Apple.

“There was a big sector rotation as money left high value, growth sectors in tech like Amazon and went to value and cyclical sectors like energy, industrial, financials,” said Tim Ghriskey, chief investment strategist at Inverness Counsel in New York.

In currencies, the dollar weakened against the yen to 106.52 on concerns the coronavirus could spread further than previously thought if businesses reopened prematurely.

The euro was up 0.3 percent at $1.0848 though the euro index eased after Fitch cut Italy’s credit rating to BBB-, just one notch above “junk” status.

The dollar index against a basket of currencies fell 0.2 percent.

U.S. crude was trading above $50 a barrel just in February.