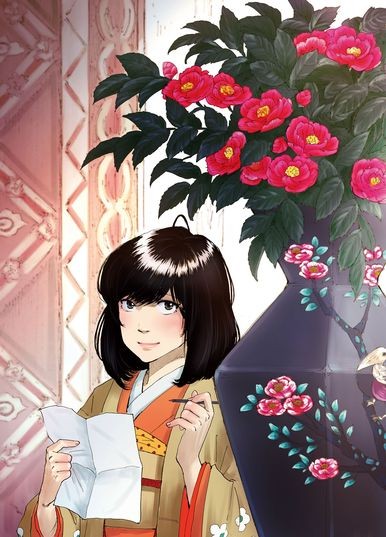 Kan Takahama's "Nyx's Lantern," which centers around a girl who becomes a sales clerk at an antique shop in Nagasaki after losing her parents in a war in 1877, won the Manga Grand Prix at the 24th Tezuka Osamu Cultural Prize.

The Originality Prize, given for fresh talent and novel modes of expression, went to Retto Tajima for her works including "Mizu wa Umini Mukatte Nagareru" (The water flows toward the sea).

The Short Story Prize was awarded to Yama Wayama's "There Is No Other.," while the Asahi Special Prize went to the late manga artist Machiko Hasegawa to commemorate the 100th anniversary of her birth.

Each winner will receive a bronze statue. The Manga Grand Prix winner will also take home 2 million yen ($18,800), while the Originality, Short Story and Asahi Special Prize winners will each receive 1 million yen.

The awards ceremony was initially scheduled to be held in June at Hamarikyu Asahi Hall in Tokyo's Tsukiji district, but it was postponed to prevent the spread of the new coronavirus.

Manga titles published or released in Japan in 2019 were eligible for the awards. For the top Manga Grand Prix, eight judges each awarded a total of 15 points and no more than five to any one manga. Eight titles with the most points advanced to the final round of deliberations conducted by telephone, along with one title that was ranked first in the recommendations by bookstore staff and many experts.

After losing her parents in the Satsuma Rebellion in 1877, Miyo starts working as a salesgirl at a curio shop in Nagasaki. She finds love in a place akin to a "wonderland" lined with foreign imports and matures in Paris during the Belle Epoque.

Dubbed an "antique-themed romance," "Nyx's Lantern" is conveyed through simple brushwork and unfolds with a slow plot development before it ends with a shocking scene of Nagasaki in 1945. An old Miyo speaks her last words to her grandchild, saying: "It's all right, I'm sure you'll see better days after this."

"I started out after I decided the last scene," Takahama said about her first manga series. "Nagasaki flourished, lost everything and regenerated itself. I, too, experienced alcohol addiction, the Kumamoto earthquakes and many other things, but I have kept pushing and made it through."

Takahama was born in Amakusa, Kumamoto Prefecture. She made her professional debut in 2001. Her Grand Prix award is well-deserved after her previous works "Flight of the Butterflies" and "Sad Girl" were also nominated for the top prize.

When "Nyx's Lantern" rolled into its second year in 2016, Takahama's apartment building in Kumamoto became unlivable due to powerful earthquakes that struck the prefecture. She was forced to spend nights in a car to continue her work because she felt it was now or never to tell the story.

Takahama said the new coronavirus pandemic made her think of her grandmother, whom the author said she used as a source of inspiration when she created Miyo.

"My grandmother, who was born when the Spanish flu was raging, said she had very few classmates when she started elementary school," Takahama said. "I'm alive, I could present my work to the world and earned recognition, all because she survived and kept the cycle of life going. I found it touching in a mysterious way.

"I don't know how things will play out, but I want to continue to face challenges in a positive manner," she added. "I want to keep creating works that are encouraging and interesting for readers to help them face and get through reality."

Tajima is known for her storytelling style, which invokes the subtleties of complex emotions that are hidden behind the gentle-looking illustrations and simplified dialogue interwoven with quiet tension and lyricism.

"I would never have known how hard it was to create manga that could fascinate adults and children alike like Tezuka's works until I serialized (the winning title) in the manga magazine for boys, so I'm glad that I did," Tajima said. "I'm honored to receive an award commemorating Mr. Tezuka with this work."

Portrayed in a matter-of-fact way in Wayama's "There Is No Other." are off-the-wall behaviors of senior high school students, although they are drawn in a serious manner. For example, one character visits a classmate's home wearing a panda suit out of the blue, while he uses wooden panels of a canvas to dry sweet potato slices.

The artist made her professional debut in 2016. The winning title, which is an anthology of her works previously published in a "dojinshi" fanzine and on the internet, has drawn attention for her quirky sense of humor.

"I feel I am saved after this manga was accepted because I drew it freely and spontaneously when everything was not going well," Wayama said.

Hasegawa was born in Saga Prefecture in 1920. She studied manga under the tutelage of "Norakuro" creator Suiho Tagawa before making her professional debut at age 15.

An animated TV series adaptation of "Sazae-san" has been aired by Fuji Television Network Inc. and its affiliates since 1969, beloved by many generations of viewers.

"Machiko Hasegawa was shy and reserved, but actually, she was very mischievous and cheerful like a little girl," said Junji Kawaguchi, director of the Hasegawa Machiko Art Museum. "I think she would be most happy to receive the prestigious Special Prize in the year of the 100th anniversary of her birth."