Japan likely to extend state of emergency for one month 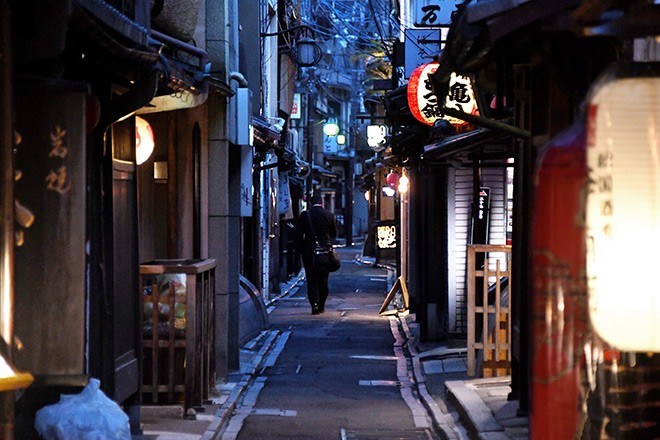 An entertainment district in Kyoto has only a few pedestrians on April 16, when the state of emergency regarding the coronavirus outbreak was expanded to cover the entire nation. (Kenta Sujino)

Japan plans to extend the state of emergency over the new coronavirus outbreak for at least a month as the initial May 6 deadline approaches, sources said.

Prime Minister Shinzo Abe met with Toshihiro Nikai, secretary-general of the ruling Liberal Democratic Party, and Motoo Hayashi, a deputy secretary-general, on April 30 and informed them he intended to extend the state of emergency.

After the meeting, Nikai told reporters, “His decision is very appropriate.”

Hayashi told reporters that a decision on the length of the extension would be made after the government’s panel of experts was consulted.

At the April 29 Upper House Budget Committee session, Renho, a member of the opposition Constitutional Democratic Party of Japan, asked Prime Minister Shinzo Abe if the state of emergency would end on May 6.

“I believe a serious situation continues to exist,” Abe responded.

He indicated that a general direction for an extension would likely be made in the next few days, adding that an announcement of an extension just before the deadline would lead to “extreme confusion.”

The government plans to convene a meeting of its panel of experts on the novel coronavirus on May 1.

After the views of panel members are heard, Abe will probably decide within days on the length of the extension and what areas will be covered, the sources said.

A number of organizations, such as the Japan Medical Association and the National Governors’ Association, have already recommended that the state of emergency be extended for the entire nation.

“We will have to respect such views,” a high-ranking official in the prime minister’s office said.

One proposal being considered is to give prefectural governors more flexibility on decisions concerning requests to local businesses to shut down or cut back on operating hours.

Yasutoshi Nishimura, the state minister in charge of economic revitalization who is also overseeing the anti-coronavirus measures, told reporters on April 29 that he intended to hold a videoconference on April 30 with the National Governors’ Association.

April 30 would mark two weeks since the state of emergency was expanded to cover the entire nation. Nishimura said he expects data to emerge in the meeting about the effects of the governors’ requests for the public to remain at home.