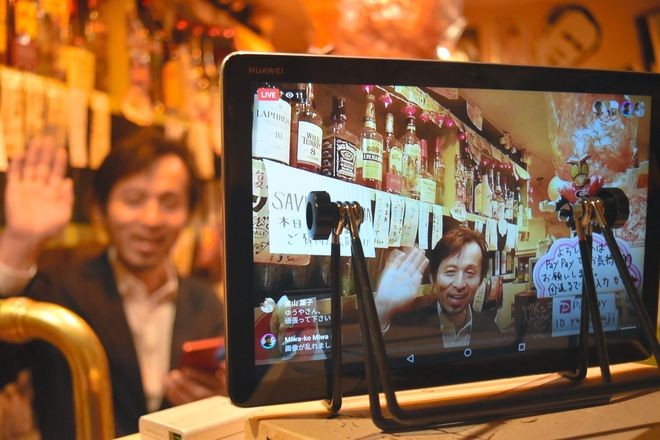 Yuya Ishikawa, manager of Bar Darling, speaks to customers via a video conference in the Shinjuku Golden Gai entertainment district in Tokyo on April 15. (Ryo Miyazaki)

A dim light emerged from a lone bar in a dark and quiet Tokyo alley that is normally filled with chatter, laughter and revelry.

Bar Darling was the only shop open in the alley, and inside, manager Yuya Ishikawa, 46, exchanged greetings to an empty counter. On closer look, he was talking to a computer screen, part of the “livestream being broadcast” service advertised on a poster outside.

Although a slide in sales is inevitable with businesses shut down to prevent infections, the goal of many operators is to stay in touch with their regulars and ensure they return to their usual haunts after the health crisis ends.

Bar Darling is located in Golden Gai, a popular area of Shinjuku lined with 300 bars and pubs.

“Hey Ishii-chan, good evening,” Ishikawa said to the tablet screen on an evening in mid-April. “Hello Dragon. Thank you for dropping in from Osaka.”

While checking for comments on his smartphone, Ishikawa moved the tablet device around to show the inside of the bar. He then filled his glass with beer for a toast.

He talked like a radio personality but quickly responded to a message on the display from a customer who “felt that I am actually at the bar.”

Ishikawa said he was deeply moved when someone wrote, “I will send masks I made to you.”

Ishikawa has been live streaming almost every day since he closed his bar on April 1. After he began showing his ID for an internet payment service on the monitor, some of his regulars sent him cash donations.

The live streams also allowed Ishikawa to be reunited with junior high school classmates and foreign sightseers who had visited the pub.

“I am glad that I can be connected with others,” Ishikawa said. “My establishment is built on its nice atmosphere and personal relationships.”

Other operators in Golden Gai are cooperating with each other to overcome the difficulties.

Yosuke Takeishi, 39, who shares videos of his Bar Saru for free, appeared in a video-conference through the Zoom app on April 20 with staff members of other restaurants. They entertained online visitors with comedy-like talks.

Takeishi, who has been working in Shinjuku for more than 10 years, collaborated closely with managers of surrounding stores to deal with the aftermath of the 2011 Great East Japan Earthquake and tsunami and the fire that swept through the area in 2016.

As part of the current cooperation efforts, the association of restaurant operators there showed members how to apply to the Tokyo metropolitan government for a subsidy targeting businesses that have suspended operations due to the virus.

The instructions were given a week before the subsidy program started because some elderly operators were not familiar with using the internet.

“This time, it is much more difficult for us to pull together our efforts because most restaurants have been shut down,” Takeishi said.

But he said he will never give up. “I will work so the light of Golden Gai will never be extinguished.”

A saloon bar in the nearby Shinjuku 2-chome district, home to many gay bars, has also continued its operations through the internet.

Kuriko, manager of the 40-seat bar where cross-dressing staff usually serve customers, chatted with regulars over the Zoom app in mid-April.

The online party lasted from 7 p.m. through midnight. Under a two-hour online service that started on March 31, when people disappeared from the district, visitors are required to pay 2,000 yen ($18.70).

“Shinjuku 2-chome is now a ghost town,” Kuriko said. “I desperately devised the measure to prevent my business from going under.”

But the effort is not enough to cover the rent and the wages of the 18 staff members. A paltry 10 people emerged on Zoom for the party that night.

Although Kuriko is looking to apply for the government’s subsidy, those funds also appear to be insufficient.

“The money will help for only a limited period of time, taking into account the much higher sales generated under normal conditions,” Kuriko said.

Still, the manager has stayed positive, inspired by the words of the regulars. One of them, for example, told Kuriko, “I want to drink at the shop again.”

Another said, “Thank you for connecting with me online.”

(This article was written by Ryo Miyazaki and Nobuo Fujiwara.)