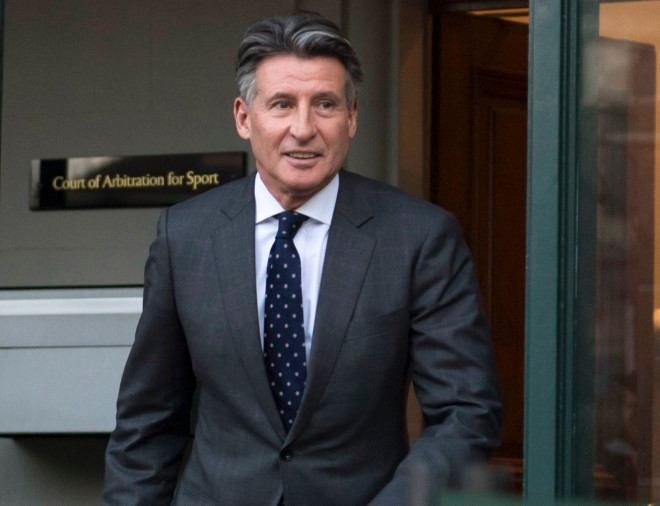 Sebastian Coe leaves the Court of Arbitration for Sport in Lausanne on Feb. 18, 2019. (Keystone via AP, file photo)

LONDON--World Athletics President Sebastian Coe is worried that the delayed Tokyo Olympics could still be in jeopardy unless the coronavirus pandemic can be contained by next year.

The Summer Games have already been moved by a year to July 2021 as the world tries to limit the spread of COVID-19.

“I think it’s pretty clear, though, that you couldn’t go on forever postponing an Olympic Games,” Coe, who helped organize the 2012 London Olympics, said in an interview on Wednesday. “There comes a point where you do have to start posing questions. I hope we’re a little way off that yet.”

IOC President Thomas Bach and Japanese Prime Minister Shinzo Abe said last month when the delay was announced that the Tokyo Games would not be held beyond the summer of 2021.

And Japan Medical Association president Yoshitake Yokokura said Tuesday it would be difficult to hold the Olympics unless effective vaccines are developed.

“I’m really genuinely hoping that the pandemic will have been curtailed,” Coe said. “I don’t know enough to even speculate about vaccines. ... Forget the Olympic Games at the moment, I’m sure that’s what most medical teams inside governments are trying to grapple with at the moment.”

The Olympics being postponed led to the world track championships in Eugene, Oregon, being rescheduled for August 2022. It will be staged after the Commonwealth Games in the English city of Birmingham.

A more immediate concern is finding a way for this year’s track season to get under way, with Diamond League meets postponed.

“The ambition is to get the athletes back into competition as soon as we possibly can but only when it is safe to do so,” Coe said. “If it’s not safe you can’t put them at risk. You shouldn’t actually be putting those communities that you want to be enjoying the sport at risk as well.

“So at the moment it’s really trying to create some structures that with best endeavors we’re able to fulfill, but I don’t think any of us really know what the next few months is really going to look like. The one advantage we have actually is at this stage being an individual sport. We can organize things where you don’t actually need 22 people on a pitch.”