Contaminated exhaust stack at Fukushima plant finally cut in half

A highly contaminated structure at the Fukushima No. 1 nuclear power plant site is dismantled for the first time on April 29. (Kenji Notsu) 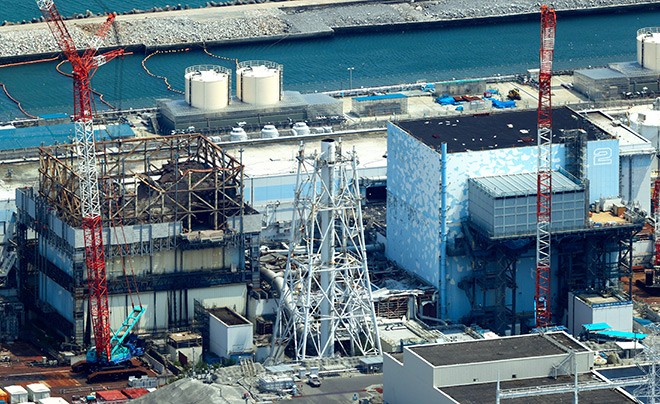 A contaminated exhaust stack at the Fukushima No. 1 nuclear power plant in Okuma, Fukushima Prefecture, is dismantled on April 29. (Shiro Nishihata)

OKUMA, Fukushima Prefecture--Work to dismantle the upper half of an exhaust stack at the crippled Fukushima No. 1 nuclear power plant finished on April 29, the first time a structure highly contaminated by radiation was dismantled at the plant.

The chimney, which is 120 meters tall and about 3 meters in diameter, was used for the No. 1 and No. 2 reactors of the plant, operated by Tokyo Electric Power Co.

On the morning of April 29, workers spent an hour to lower sliced parts of the stack to the ground from a height of about 60 meters. With its upper half removed, the chimney now stands 59 meters high.

“I think there are still many things left that local companies can do,” said Isamu Okai, 52, a board member of local construction company Able Co., which carried out the work. “We want to continue our involvement in the decommissioning of the plant by making use of the expertise we gained from the dismantling work.”

When the nuclear disaster occurred at the plant in March 2011, vapor containing highly radioactive substances was released through the stack. But it raised concerns that the unstable chimney could collapse.

During the dismantling project, which started in August, workers remotely operated cutting equipment hoisted by a huge crane to reduce their exposure to radiation. They carried out the operation at a remote control room set up in a large remodeled bus on a hill about 200 meters from the site.

They faced many problems during the project. Rotary blades attached to the equipment wore out faster than expected, and telecommunications between the equipment and the control room frequently disconnected. The work had to be suspended every time a problem occurred.

As a result, it took a month to slice the uppermost part of the stack, which is about 2 meters high and weighs around 4 tons. That work was initially planned to be completed in a day.

In December, the rotary blades stopped working, forcing workers to be lifted on a gondola to slice the stack with an electric power tool at about 110 meters above the ground.

The work, however, went smoothly from the middle stage of the project. Workers replaced the blades with more durable ones and improved the way they sliced the stack as well as the stability of telecommunications.