Abe to consider moving start of the school year to September 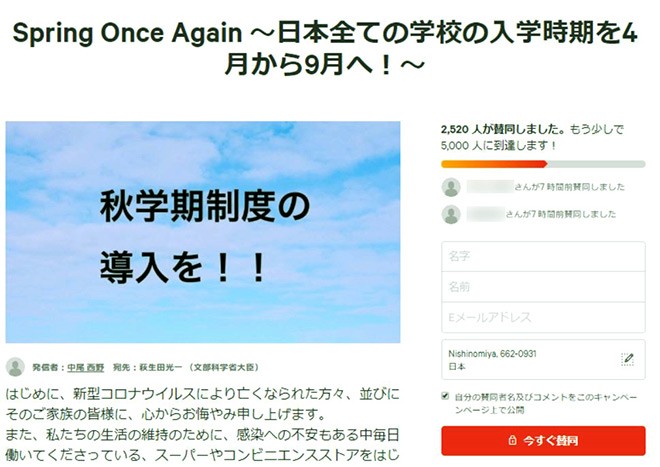 Two high school students in Osaka started an online petition to seek September start of the school year. (Captured from the website)

Prime Minister Shinzo Abe said he will consider changing the start of the academic year to September because schools could remain closed for a prolonged period during the novel coronavirus pandemic.

“It is a fact that September enrollment is mainstream around the world,” Abe said at a Lower House Budget Committee session on April 29. “I would like to consider various factors before making a decision.”

The school year starts in April in Japan. But with most schools closed down since early March to prevent the spread of the virus, calls have grown among students, parents and local government leaders to push back the start to September.

Proponents have argued that an autumn start of the school year would make it easier for Japanese students to study abroad and could prevent hazards associated with the winter season of university entrance exams, such as influenza outbreaks.

Yuichiro Tamaki, head of the Democratic Party for the People, and Yasushi Adachi, a lawmaker of Nippon Ishin (Japan Innovation Party), pressed Abe on the issue in the Diet.

“I know there are some opinions that we should be very careful because such a change would have a great impact on all of society,” Abe said. “While we are now facing a drastic change in society, I would like to consider various options.”

Education minister Koichi Hagiuda said, “If the issue can be shared among people across Japan as a challenge for our entire society, September enrollment would be an option with high potential.”