VOX POPULI: Japan’s ‘hanko’ seal required on legal papers not worth dying for 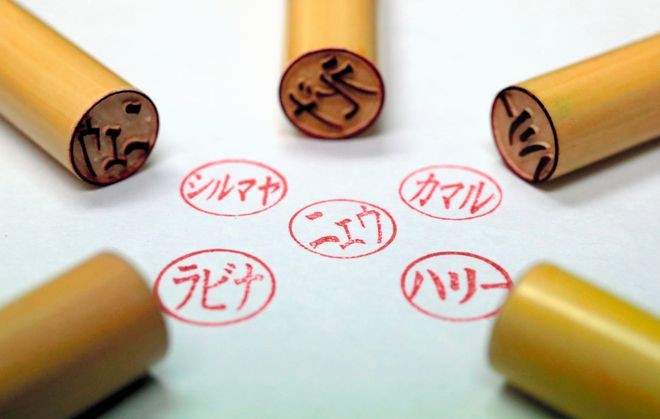 Seals of foreign names are shown in katakana from left to right. (Asahi Shimbun file photo)

The Japanese custom of stamping official documents with "hanko" carved seals is believed to have been imported from China in the latter half of the seventh century.

The custom was part of the Great Reforms of Taika (Taika no Kaishin), which sought to model Japan's system of government on that of Tang China.

During the Nara Period (710-794), hanko forgery was subject to stiff punishment, according to "Hanko no Bunkashi" (Cultural history of hanko) by Kinya Niizeki (1916-2003).

For instance, counterfeiting a hanko for use on official documents was punishable by "banishment of 2,000-ri" (approximately 7,800 kilometers). And if the forged hanko happened to be an imperial seal, the punishment was death by hanging.

In short, tampering with official seals was an unforgivable act of sacrilege for which the perpetrator could lose their life.

The "reverence" with which the Japanese treat their hanko is still very much in evidence today, so much so that people are risking their health--and even life--to maintain this old custom.

Amid the COVID-19 pandemic, a grave problem has arisen for company workers who are forced to defy stay-at-home orders because they have to come to their offices to affix company seals on documents.

If they can simply sign the documents, as in the West, they could stay home and send the documents by post. And let's not forget that in this digital era, documents can be signed electronically.

Surely, government offices and private corporations alike could have considered doing away with hanko a long time ago. But old habits die hard, unfortunately.

In the nation's battle to prevent the spread of coronavirus infections through teleworking and avoidance of rush-hour commutes, work-related issues that have always existed have come into sharper focus.

But it has also been pointed out that if drinking together is essential for staying in the loop, so to speak, then that puts those who are unable to attend at a disadvantage.

In that sense, the pandemic-induced self-isolation may be a blessing in disguise. But then, I hesitate to say so when I think of the sheer gravity of the COVID-19 crisis.

Getting back to the history of hanko, it appears that the use of the seals was not a rock-solid custom all the time.

During the Middle Ages, in fact, the use of symbols or marks, called "kao," replaced hanko as the mainstream practice. And during the Meiji Era (1868-1912), there was controversy over which carried greater weight--a hanko stamp or a written signature.

It appears that over the last century we Japanese simply haven't discussed the matter seriously enough.