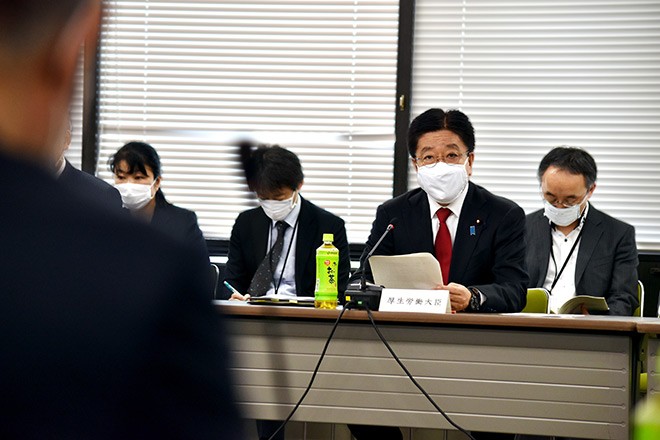 Health minister Katsunobu Kato addresses the government panel of experts on infectious diseases at a meeting held in Tokyo on May 1. (Ryuichi Hisanaga)

A government panel of experts looking into the coronavirus outbreak on May 1 suggested maintaining the current framework of measures on grounds another surge in new infections would place an additional burden on the medical care infrastructure.

The panel did report that the requests by prefectural governors to have residents remain at home as much as possible and to ask certain businesses to temporarily close operations had the effect of causing a decline in new infections.

But at a May 1 news conference after the meeting, Shigeru Omi, the vice chair of the panel who also serves as president of the Japan Community Healthcare Organization, said, “While there is a declining trend in new infections across the nation, the pace is more gradual than that for Tokyo.”

He gave as a major reason the movement of people from major urban areas, like Tokyo, to rural regions where coronavirus infections have subsequently spread.

A copy of the panel’s suggestions obtained by The Asahi Shimbun before the May 1 meeting said infection trends and measures taken in other nations showed the need for a sustained response in Japan.

Yasutoshi Nishimura, the state minister in charge of economic revitalization who also heads the government’s anti-coronavirus effort, said, “We received the warning that the efforts to change people’s activities and the results until now will come to nothing if there is another increase in new infections due to a relaxation” of the state of emergency.

Nishimura also mentioned the possibility of different standards from May 7 and explained that the panel also suggested that rules on social behavior should reflect the virus situation in the regions or prefectures.

“There will be a need to implement measures for two types of regions: those where a continued thorough change in people’s activities is needed and those where some easing of the restrictions is possible,” Nishimura said.

Under that scenario, the tight restrictions would likely remain in place for 13 prefectures, including Tokyo and Osaka, that have been designated as areas where special precautions are needed to prevent sharp increases in new infections.

The panel indicated that various measures until now have helped to prevent an explosive surge in the cumulative number of infections, particularly in the specially designated 13 prefectures, and led to a decrease in the daily number of positive tests.

But the panel also said some regions were still not meeting the government’s goal of cutting back on contact with others by 80 percent.

In its recommendation, the panel warned, “If there is a relaxation of the ‘thorough restrictions on activities,’ there is the possibility of a new increase in infections, meaning the efforts to change the activities of the public will have come to naught.”

The panel suggested that thorough restrictions on activities should continue until the number of new infection cases falls under a certain level.